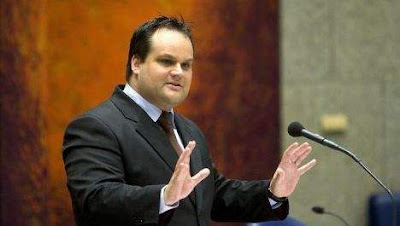 Apparently, the Dutch Parliament has given the country’s Finance Minister Jan Kees de Jager until Friday to outline possible scenarios for how to deal with Greece, including the impact on the Netherlands should the Greek government default on its debt.

This comes hot on the heels of leaks in the Dutch media, claiming that the Dutch Finance Ministry now considers a Greek default “unavoidable”. According to the leaked documents, the Dutch government is now instead planning for how to manage a Greek default in an orderly manner. The reports were immediately denied by the Finance Ministry). The other night, Dutch TV programme Nieuwsuur (the Dutch equivalent to BBC Newsnight) featured an interview with de Jager (picture), who said (our emphasis):

“as Finance Minister I need to assume in public that Greece is complying with its obligations, but for us it is important that we continue to insist that Greece sticks to the agreement and if they don’t, then we’ll have to indicate that we cannot contribute our share.”

As the reported highlighted, note the use of “in public” (suggesting that “in private” he thinks otherwise). Hardly an earth-shattering revelation given the state of the Greek economy, but still interesting to see him being so candid about it. He also seamed to suggest that leaks of this kind could serve to put additional pressure on Greece.

A the risk of a Greek default, he said:

“There is indeed a large risk, and it can be that Greece forces us to do that. However, this kind of pressure can push Greece to take yet another step. And that’s what we’re assuming for now.”