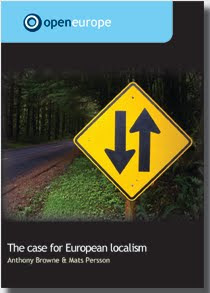 Today we publish a report, written by ex-head of Policy Exchange Anthony Browne and our Director Mats Persson, suggesting a fresh EU strategy for the UK government – European localism. In yesterday’s Sunday Times, we trailed the piece, arguing:

“closer union cannot continue for ever. In some ways the EU is already more centralised than a country — individual American states have more freedom over sales tax than do EU members. And what was right 50 years ago is not necessarily right now. When challenges change, so should institutions.

The euro crisis has tested to destruction the principle of ever closer union — its momentum required Greece to join the euro when it was not ready, directly leading to turmoil. As the crisis has unfolded, the debate has moved to an existential question: what kind of Europe do Europeans want?”

“Popular support for the EU has plummeted even in the countries that were once most supportive and national parliaments have grown restive because their powers are being usurped. The euro crisis is also forcing Europe to develop a more variable approach to co-operation, with countries integrating at different speeds.

The EU is ripe for change and this presents Britain with an opportunity to push forward its own strategy — which we call European localism. Since it joined in 1973 Britain has never shared the strategic vision of ever closer union, but nor has it had an alternative strategy of its own. As a result it has remained disengaged from Brussels, focusing on defensive tactics limiting the perceived damage of European legislation, rather than trying to steer the direction of the EU. This is an unsatisfactory position.”

But, we argue, in the wake of the crisis,

“Britain can position itself as the champion of European localism, taking the principles and rhetoric of localism widely endorsed at a national level and applying them at a European level. The same arguments apply: if you devolve where possible and centralise only where necessary, you get better democratic engagement, more flexibility and better policy making.”

As we note in our press release, in terms of concrete proposals, this would include:

As we conclude in the Sunday Times piece, This “is a strategy that should command wide cross-party support in Britain and enable us at last to engage fully in the EU.”