Another day, another poll

While the eurozone crisis rumbles on, the mis-match between what the eurozone needs to survive (probably a full-blown fiscal union) and what citizens accept, is growing ever more conspicuous.

Therefore, we were a bit surprised when the we read the following headline in Friday’s Die Welt: “Die Deutschen wollen mehr Europa” (Germans want more Europe). This was apparently the most eye-catching finding in a new opinion poll carried out by DeutschlandTREND for German TV station ARD. Some in the twittospehere and elsewhere interpreted this as endorsement by German citizens for more powers being transferred to the EU institutions.

As it turns out, the question didn’t even mention the EU. Instead, respondents were asked whether they supported “more common policy making in Europe over the next few years” (“mehr gemeinsame Politik in Europa”), which can mean a whole range of things, including more inter-governmental cooperation for example. On this question , 64% answered “yes”. It’s still an interesting finding, but clearly not one that can be taken as a strong indicator of German public support for the transferral of more power to EU’s institutions.

(We’re not suggesting that there’s anything sinister about the Die Welt’s write-up of the poll – just a normal case of seeking to spice up a headline. Not like when the European Commission tried to have us believe that just because a majority of respondents to a Eurobarometer poll said that “stronger coordination of economic and financial policies among all EU member states” would be effective or fairly effective to combat the ongoing crisis, that therefore meant that a majority of EU citizens favoured “stronger European economic governance”).

However, the DeutschlandTREND poll provides a number of other very interesting findings, which which seem to suggest that, if the eurozone moves towards fiscal union, it will probably do so with German citizens kicking and screaming. According to the poll, only 35% of Germans would accept even “limited” versions of Eurobonds, while 55% oppose them. 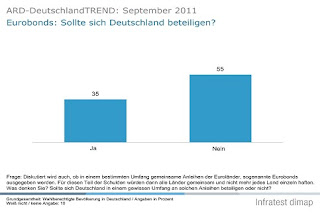 As in previous polls, the bailouts aren’t popular either: 66% of Germans are opposed to the Bundestag approving an extended bailout fund: 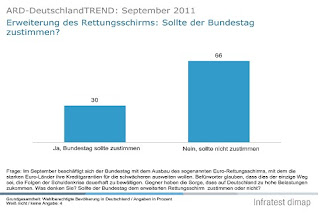 At the same time, 53% of respondents say they oppose a “United States of Europe”, with only 42% in favour, which clearly qualifies the conclusion that Germans are in favour of “more Europe”.

However, the most conspicuous expression of changing public sentiments over recent weeks comes from Finland. A poll out last week shows that 47% of Finns think the euro has done more good than harm. When that same question was asked in a Eurobarometer poll only one year ago, 71% said the euro had done more good than harm. Meanwhile, 49% of Finns are opposed to the Greek bailout, with 34% supporting it. It’s hard to find a clearer illustration of the political cost of the bailouts and the eurozone crisis.

If it wasn’t for that annoying thing called democracy…