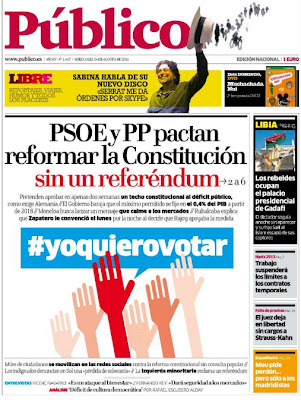 In the early hours of this morning, Spain’s ruling Socialist party, PSOE, and the conservative opposition, PP party, brokered a deal on amending the constitution to include limits on public deficit and debt. An idea that was pushed by Germany and France just last week.

The very fact that the opposing PSOE and PP have managed to agree to something as big as a constitutional change in the space of just a few days is indicative of the depth of the economic problems facing this peripheral member state. The speed of the deal also demonstrates that Spain is committed to dealing with the economic crisis head on.

Despite widespread reports yesterday that the PSOE had “serious” divisions over the amendment, the deal looks to have been reached with substantial political support. All autonomous communities, except Andalucia, said they would support the amendment yesterday, despite entrenched economic problems and a joint deficit of more than €13bn. This isn’t necessarily a surprise considering that the PP now hold the lion’s share of autonomous communities’ seats, and as leader Rajoy likes to point out, the PP has been calling for a deficit limit for quite a while.

The constitutional amendment will not fix limits itself, but will be accompanied by a law limiting the structural deficit at 0.4% of GDP from 2020 (the 0.4% limit breaks down into 0.26% for the central government and 0.14% for Spain’s regional governments). This is far stricter than the mooted 3%, which was rumoured to be the target level over the past week (in line with the original Growth and Stability Pact). The amendment also comes with a rather interesting get-out-clause, as it allows deficit limits to be overridden in cases of natural disaster, economic recession or other exceptional circumstances.

This undoubtedly gives any future government significant scope to suspend the limit, as long as it can count on an absolute majority in the Spanish Parliament. Add in the fact that the specific levels which the limits are set at are enshrined in law rather than in the constitution directly (making them much easier to amend), and the proposal begins to look more like a gesture to Germany and the ECB than a substantive shift.

While political support for the measure has been strong, it’s certainly not universal. Many have argued that a constitutional change shouldn’t be made in such a small period of time and without the consent of the people. It’s only the second amendment made to the constitution since it was written in 1978 after the fall of Francisco Franco’s dictatorship.

Spanish unions and the United Left coalition yesterday threatened to mobilise calls for a referendum and said they would put the constitutional change at the heart of their election campaigns. If twitter is anything to go by, this could be a popular move. Following the announcement on Tuesday, the public turned to twitter to call for a referendum as #yoquierovotar (i want a vote) trended. The next day the second biggest left-wing daily Público led the calls for a referendum (pictured above).

Despite this, neither PSOE nor PP have even publicly contemplated the idea of a referendum. Now that a formal proposal has been made, Parliament will vote next Friday, and it will go to the Senate the week after. In both chambers it needs a three-fifths majority.

Even though introducing the debt and deficit limit is a positive move and should gain Spain some leeway with the markets, it doesn’t change the fact that the problems that led Spain to this point were not ones of massive public debt or deficit but a huge real estate bubble, excessive private sector debt (both leading to banking sector troubles) and a decade of lost competitiveness.