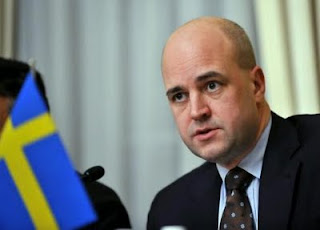 This is some very sensible stuff, from the usually very sensible Swedish Prime Minister Frederik Reinfeldt, reacting to yesterday’s meeting between Merkel and Sarkozy.

“The best thing would be clear formulas for advancing decontamination of public finances.”

“I do not believe in this idea, if it is not adapted globally, for everyone at the same time. What was expressed yesterday was the idea to only impose it in the Eurozone.”

“Sweden is interesting because we are the only country with any real experience on this type of transaction tax. If it is only imposed on one part of a market, our experience is that it brings small amounts of income, but transactions move away. If this is imposed on the Eurozone, it is easy to see how a large part of international transactions move to London, or why not Stockholm?”

All of which of course is true, though a rules-based system for public spending – where Sweden clearly takes a similar line to to Germany – is fine in theory, but difficult in practice (read: national democratic politics).

Incidentally, when will Reinfeldt come out against Sweden joining the euro? The Swedish centre-right parties’ support (their leaderships, not members) for the euro – a manifestly flawed project which has nothing to do with liberal economics – remains one of the greatest political anomalies in Europe today.