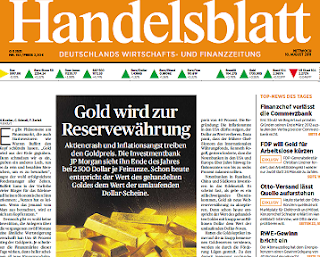 Bild Zeitung, one of Europe’s most-read newspapers features a recommendation on its website for readers to buy gold, also known as “the barbarous relic”.

The price of gold in euros has spiked over the last month (and year), and gold is being praised by the tabloid as “one of the most certain assets in times of crisis”. Its front page yesterday pushed its readers to take part in a contest to win some gold.

While we would hesitate to take any investment advice from newspapers (remember Handelsblatt recommended buying Greek bonds back in May 2010), combining it with the strong rally in Gold prices over the summer, it does suggest that investors in Europe and around the world are in the midst of a ‘flight to safety’ after seeing their trust in politicians ability to deal with the eurozone crisis and restore the eurozone economy to economic growth significantly dented. (Undeniably other factors have played a part, but with the eurozone crisis rumbling on for the past year and into the future it must be seen to have played a significant role in undermining trust in the global economy).

Handelsblatt also featured a front page this week with the title “gold becomes the reserve currency“, reporting how the central banks of Russia, China and South Korea are buying up gold, accentuating the feeling in the German press that trust in the euro is quickly being eroded.

A senior Bundesbank official told journalist Michael Lewis that, if the ECB did face significant losses on its exposure to peripheral economies, leading to a recapitalisation request (as Open Europe has highlighted), the German central bank already has a plan in place to some extent, saying:

Given the massive increase in gold prices recently, which show little sign of slowing down, and the suggestions that gold could become the world’s reserve currency again (putting aside questions over whether its rise is a bubble or not), surely one would think twice about reducing gold holdings in an attempt to support a floundering currency, particularly to cover the losses from a sovereign default within the euro which could bring it down in any case.