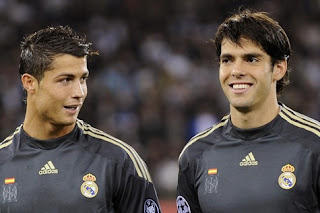 Another day, another ludicrous headline for the ECB. The latest story doing the rounds is that famed footballer Cristiano Ronaldo could essentially be put up as collateral with the ECB in exchange for liquidity. It’s currently been covered by PressEurop, Süddeutsche Zeitung, Zerohedge and FT Alpahville (which should suggest that it’s not a completely made up story, but who knows).

The mechanics of it actually seem to make some sense, unbelievably. Spanish bank Bankia provided significant loans to Real Madrid to fund the purchases of Ronaldo and Kaka (they cost around £145m in total, so not a pittance). These loans have been rolled into a Collateralised Loan Obligation which Bankia looks to be planning to post with the ECB in exchange for liquidity. Just to top it all off Moody’s gave this likely opaque security an Aaa (sf) rating.

So can we expect to see Ronaldo hanging around the ECB building in Frankfurt signing autographs and doing tricks anytime soon? Probably not, both Bankia and Real Madrid would have to default on their loans before the ECB called in the collateral. (Though, if anyone has any suggestions over how the ECB could put Ronaldo and Kaka to use, please do leave a comment!)

Where will this crisis go next….