It’s the taking part that matters… 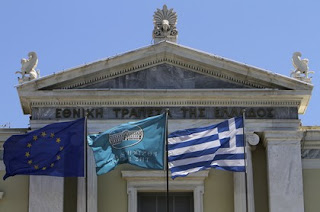 We’ve been wondering, as many others have, whether the 90% participation rate for private sector involvement in the second Greek bailout is actually realistic or not. FT Alphaville highlighted the confusion over which institutions have so far agreed to take part, with the Institute of International Finance (IIF) managing to circulate numerous lists almost simultaneously (the latest version has 29 leading financial institutions on it, incidentally mostly all European banks). So who is currently not on the list and what does that mean?

So far, RBS, German DZ bank and Cypriot Marfin Popular Bank have expressed their concerns over the plans and are delaying their decision on whether to participate. These banks hold €1.2bn, €731m and €3.4bn in Greek bonds respectively. With Cyprus facing its own financial problems now it looks less likely that Marfin, the country’s second largest bank, will want to book a loss at this point in time.

While RBS may well be considering the long term implications of participation, such as whether it might be put in a similar position, but in regards to Ireland, in the future. Given its massive exposure to Ireland we’re sure it would want to limit its involvement there. The fact it’s essentially taxpayer-backed is also problematic – most UK taxpayers would probably like to see RBS gets its stake in Greece back in full as soon as possible, rather than see its loans extended under the plans being proposed (especially since Greece may still default in the future).

On top of these banks, Hellenic Postbank and ATE Bank (both Greek) have said they cannot take part since they are both in the midst of a restructuring and privatisation. They hold €4.3bn and €7.25bn in long term Greek debt. Now, we’re not sure whether these exceptions were known and therefore accounted for in the 90% estimate, but if not they provide a substantial dent to the chances of meeting that assumption.

So far then, that’s €16.8bn that’s missing and which may not be included in the plan that we know about (although, it’s still early days, so that could change).

Then there’s the issue of the German ‘bad banks’. Anyone who looked over the recent stress test results would have noticed the massive drop in German banks holdings of Greek debt. In fact €7.4bn and €1.4bn was just transferred from HRE and WestLB to the bad banks, FMS Wertmanagement and Erste Abwicklungsanstalt. It’s not clear whether these bad banks will be taking part in the plan, but since its meant to be private sector and they’re state backed it would actually be taxpayers taking the hit again – something the German government is keen to avoid. Therefore, that’s another €8.8bn which is severely in doubt.

Total private sector holding of Greek debt now stands at around €210bn. Our rough calculation suggests that around €25.8bn (12.2%) of that is already in doubt. Add to that the fact that, of this private sector debt, up to €85bn is reportedly held by foreign non-bank financial institutions. For example, the IDW (Germany’s auditor’s association) suggests German insurers hold €3bn in Greek debt. It’s hard to see why many of these bondholders would be keen to participate, even with substantial political pressure.

It’s far from over (we probably won’t know the final participation rate until the end of next month) but the early warning signs seem to suggest that the 90% participation rate for private sector involvement might be too optimistic.

NB – It could be that the participation rate was focused on banks, but even then getting 90% of the c.€100bn held by banks involved still looks tough given that so much is already in doubt (mostly from banks).