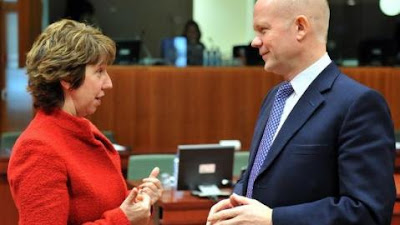 As if the EU hasn’t got enough on its plate, yesterday saw EU Foreign Minister Baroness Ashton present a proposal, at a meeting between EU foreign ministers, calling for the creation of an EU military headquarters (a so-called ‘Operations Headquarters’ OHQ). This comes despite the fact that the new External Action Service itself is barely even up and running. And despite the increasing number of voices that doubt that a single EU foreign policy is even possible.

According to the Sunday Times, Ashton wants the OHQ to “command and control” future European civilian and military campaigns. The idea has been knocking around since 2003, when it was rebuffed by the UK and the US, among others, but has been revived with the backing of France, Germany and Poland. French support for the measure goes back some time but it has always met with staunch opposition from the UK, which sees it as an unnecessary duplication of existing NATO arrangements.

Given that this is a decision that would require unanimity and that the UK is one of only two major EU military powers (France being the other), yesterday’s proposal seemed an unwise, direct challenge to the UK. The response from William Hague was expectedly unequivocal,

“There is no way we will agree to this, now or in the future…We won’t be agreeing to a permanent operational headquarters and therefore we are not able to welcome today’s report by Cathy Ashton, the High Representative, on this matter”.

“Secondly, it’s likely to be a much more costly solution than existing structures; and thirdly, a lot can be done by improving the structures that already exist”

This isn’t simply a case of the UK ‘not seeing the need’ for a permanent EU military HQ, it is that it sees it as a potential threat to the UK’s national interests. Britain will veto anything that looks like it might threaten NATO because, when it comes to defence, the transatlantic alliance remains paramount (and probably always will).

It is often said that the UK doesn’t ‘understand Europe’ but this example illustrates that this also works the other way.

The Libyan conflict has shown that European countries can and need to work together when there is the political will to do so. However, like over Iraq, it has also shown that there are often fundamental disagreements on the use of military force among EU member states, this time with France and Britain on the one side and Germany on the other. If they are serious about defence, European governments need to boost their individual capabilities and improve interoperability on an ad hoc basis. EU mission creep is simply an unnecessary and potentially damaging distraction.