Another bad review for Greece… 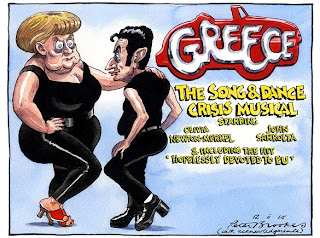 Well, considering it’s through the rose-tinted glasses of the IMF, the fourth review of Greece, which the fund put out yesterday, does not make great reading (and that’s not just because its 173 pages long).

We’re just starting to pore over the report (although much of it is similar to one the Commission put out a couple of weeks ago) but here are a few of our initial reactions.

First off, the IMF expects a second bailout package for Greece of around €104bn, with €71bn coming from eurozone members (probably EFSF) and €33bn from private sector involvement. On the bailout’s structure the report states:

“The [funding] gap will be filled through private sector involvement (PSI), with additional official support from euro area member states covering amounts not provided for by PSI.”

Interesting, here how there is no mention of the IMF being involved, despite it taking part in all the other bailouts and everyone (including us) assuming it would do so for a second Greek package. This may not seem like a big deal but the Germans were originally very keen to have the IMF involved in any bailouts, so it could cause some friction. It doesn’t fill us with confidence that even the IMF is reluctant to be associated with the next bailout package. That said we can’t imagine Lagarde would keep the IMF out given her previous cheerleading for the bailout policy.

Secondly, the whole report shows glimpses of just how wrong previous estimates from the IMF on Greece have been. Take, for example, the fiscal gap comparisons on p.12 which were 2.2% of GDP off for this year in the previous estimation (only completed in February). Yet despite this, they still give similarly optimistic estimates for next year. We can’t help but think that there will be similar revisions in the next review. (On a side note the IMF and the Commission have also decided to adopt even more complex and opaque tables in this review, making it much more difficult to figure out all the assumptions behind their figures, for example on short term debt issuance). It’s also good to keep in mind that, under the original reviews, the IMF thought or at least publicly suggested that the current bailout would be enough, yet now they’re showing a funding gap topping €100bn over the next few years.

As always the underlying assumptions play a crucial role in determining the debt sustainability of Greece. Again the IMF seems to have gone for some herculean assumptions on the Greek primary surplus and economic growth, particularly post 2015, but that seems par for the course in these reviews. Although we cannot clearly see the assumptions about short term debt issuance this time around (see above), it looks as if they expect Greece to roll it over continuously for a few years after letting some mature next quarter. We’re still sceptical about Greece’s ability to do this on a long term basis not to mention the extra €1bn it adds in interest every year.

The report does readily admit that if many of these targets and assumptions are not met, things could quickly spiral out of control for Greece (not sure where they’ve been for the past year), especially on privatisation and deficit targets. The report also admits that the assumption that all European banks and all Greek financial institutions will take part in a debt rollover looks unlikely to hold (no kidding) but adds that the slack would be picked up by eurozone countries (sure the Germans enjoyed that one).

We’d recommend checking out the analysis over on FT Alphaville and FT Brussels Blog (kudos to both on their turnaround time as well). In any case, as soon as Greece misses a few deficit targets and privatisation sales the whole report will become redundant anyway…