How attractive is the ‘French Model’? 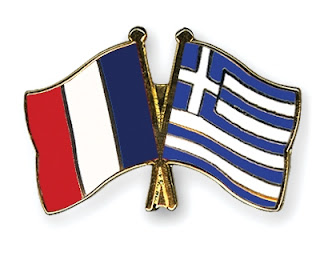 Apologies for the delay in getting our verdict on this plan out….

Unsurprisingly, the ‘French Model’, as Sarkozy has gleefully termed it, still seems to involve some significant public sector guarantees. Apologies in advance for some technical jargon which may creep into this post – it’s a complex issue but is vital to the future policy choices in the eurozone crisis. (FYI We’ll ignore the speculation about who might take part in this plan and how much it could save since any estimates would be mostly guesswork at this stage).

So, first off the plan calls for banks (read – private investors) to rollover or reinvest 70% of their holdings of Greek debt, which expire between July 2011 and June 2014, into new 30 year Greek government bonds. This debt will yield 5.5% (but could increase by up to 2.5% based on GDP growth) and will not be able to be traded until January 2022.

The Greek government will then take 30% of this money and loan it to a special fund (meaning that Greece only gets 70% of the rolled over 70% in cash, essentially accessing only 50% of the total amount originally maturing). This special fund will then use the money to purchase 30 year bonds from the EFSF (or some other triple-A creditor) equal to the same value as rolled over private sector debt (from we can tell). The fund will hold these bonds as collateral against the private sector involvement, essentially guaranteeing all the funds which the private sector has committed to the second Greek bailout. If Greece were to default, the special fund would sell these bonds and use the proceeds to cover the losses of those private sector creditors who rolled over their holdings of Greek debt.

But here’s the kicker. Since the bonds which the EFSF put up as collateral are only paid for at 30% of their value, the EFSF is essentially guaranteeing 70% of private sector involvement. If Greece were to default, even after this plan (which we’ve argued numerous times still looks likely), then the bonds would be sold off and the proceeds used to cover the banks losses. The hope seems to be that the bond will increase in value and so some profit will be used to reduce the public sector guarantee. Ultimately, how much the public sector guarantee is invoked depends on the level of losses which investors face from a Greek default (currently estimated at between 50%-60%). In the end though, governments will still be left to pay off the 30 year debt they issued as collateral and are unlikely to have ever received the full amount in cash to cover it, meaning they will essentially be indirectly paying for private sector losses.

Interestingly, we’re yet to hear from the credit rating agencies on this plan. Since the yields on the new 30 year Greek bonds would be much below market rates and the banks are still not fully recouping their original investments, the whole process could still be deemed a default, although much less likely than previous options. Oddly, earlier in the week ECB Governing board member Juergen Stark insisted that any ‘Brady bond’ style initiative (which is how many are viewing the French plan) would be illegal under the no-bailout clause of the EU Treaty (clearly the irony is lost on him).

In any case, it’s a complex and convoluted plan which looks to be as voluntary as possible and requires minimal private sector involvement. But, importantly, it looks reliant on significant taxpayer-backed guarantees. And we’re therefore back where we started – taxpayers being left with the ultimate risk.

See below for the French Banking Federation’s graphic of the plan: 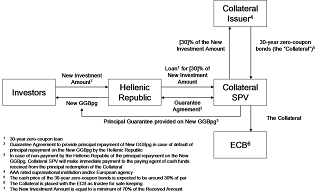