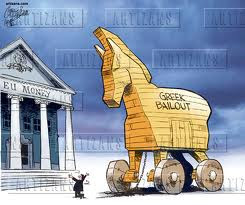 Bloomberg reports that Thomas Wieser, Head of the Austrian Finance Ministry’s economic policy and financial markets department, gave a breakdown of the potential structure of a second Greek bailout at a meeting yesterday. This may just be the Austrian view but it’s worth comparing what’s being discussed to some of our estimates. According to Bloomberg the plan will amount to €85bn including private sector involvement (PSI). Doesn’t sound like enough, but keep in mind it’s not clear whether this includes the revenues from the privatisation plan and if it is on top of the original bailout (or supersedes those payments). In any case, the structure is expected to be 70% from eurozone funds and PSI, with 30% from IMF.

By our estimates (see table below) Greece needs at least €122bn to get to the end of 2014 without defaulting. That includes PSI but is on top of the money raised by the privatisations, the austerity plan, short term debt issuance and the full payment of the original bailout funds. (Also, it’s not like we’re working from completely different figures, ours were compiled on the basis of the estimates by the EU, the IMF and the Greek government).

Of course, this is all fairly tenuous at the moment but it serves as a reminder that the EU may just end up falling short on the bailout amount again. This could be for political reasons – selling a larger bailout to electorates is harder – but may just be because EU leaders expect to restructure the debt soon anyway (once the banks are safer and any looming elections in the stronger eurozone countries are out the way).

In the short term, eurozone finance ministers will hold a teleconference tomorrow to agree on whether to release the next tranche of original bailout funds for Greece (which looks almost certain). But this means that the meeting planned for Sunday, to discuss the second bailout, has been postponed. Clearly, they’ve got just enough time to stop the immediate Greek default but just too little to find a longer term solution (not that a bailout agreement would have constituted one anyway).