The verdict from Europe: what do they say about the euro? 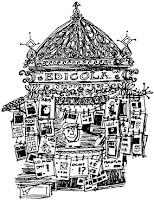 With the eurozone staring into the abyss, let’s have a look at what the papers and commentators across Europe are saying about the state and future prospects of the Single Currency.

We’ve tried to do as comprehensive a survey possible with the languages at our disposal in the office and it makes for pretty grim reading:

Let’s start with Germany. FAZ columnist Philip Plickert challenges head on the common wisdom that Germany is “the main beneficiary” of the single currency. He notes,

“In the twelve years since the euro was introduced, Germany has had on average the lowest growth rate. It was with 1.2% significantly lower than the eurozone average of 1.5% or EU average of 1.7%.”

A couple of days ago, Der Spiegel published its “Requiem for the euro” and warned,

“The euro is becoming an ever greater threat to Europe’s common future. The currency union forges together economies that are simply incompatible. Politicians approve one bailout package after the other and, in doing so, have set down a dangerous path that could burden Europeans for generations to come and set the EU back by decades.”

Moving to France, in yesterday’s Le Figaro, a trio of French intellectuals argued,

“The time has come for European politicians to face reality: the euro is dying; it needs to be finished off quickly in order to save the Europeans. But it seems appropriate to do it all together in order to avoid a deadly ‘every man for himself’ scenario…For France, the benefits of [eurozone] exit will be immense.”

You don’t read this stuff in the French press every day.

From France to Belgium (the Flemish-speaking part). Last week, Ruben Mooijman, Chief Economics Editor of De Standaard, noted that, when the euro was created,

“Criticism could be heard mainly from the Anglo-Saxon world. It was pointed out that perhaps eurozone countries trade with each other a lot, but differ radically from each other economically. Unleashing a single monetary policy upon all these countries, with all their differences, was like playing with fire, according to those critics…The critics have been proven right.”

“The EU pretends as if the Greeks will pay back their debt, as if banks didn’t suffer losses on their loans to Greece. Now the EU will pretend as if the private sector is really going to contribute to saving Greece (…) The EU will continue to build up loans upon each other until all debt has been transferred from banks to governments.”

“prefer making Greece’s ride to hell as convenient as possible. It is almost as helpful as giving someone who is about to commit suicide a soft rope in order to make the experience more enjoyable.”

“The [Greek] crisis got on the wrong track already back in 2010. Greece’s immediate cash problems were taken care of, although the main problem was that the country would never be able to survive its debts, even if they would be halved by a debt restructuring.”

“Greece stands on the brink, the debt has exploded and is growing bigger every day, and it is now only a matter of time before the country must hoist the white flag and declare themselves a bankrupt state.There are only losers in the history of Greek tragedy, and there are indications that European taxpayers will be among the largest.”

Now, let’s have a look at what the press says in the eurozone’s “periphery” (no offence). A leader in today’s Irish Times argues,

“That a continent holds its breath for a vote in the parliament of a small peripheral country [yes, they’re talking about Greece] says much about the precarious predicament in which the euro area finds itself…The EU is being shaken to its foundations by this crisis. What shape the euro zone’s economic, fiscal, financial and political structures will take in the future is unclear. One thing is certain though, they will either be very different or they will not exist.”

“As the endless crisis battering the EU gets deeper, the artificiality of the lost paradise of the ten years preceding the fiscal fire which is now spreading across the eurozone’s periphery, becomes more apparent. Greece is pushing Europe ever closer to its limits.”

“The lesson we’re asked to learn today is that it’s not possible to have a monetary union without unification (coordination, if the word ‘unification’ alarms you) of public finances. It’s not difficult to guess the lesson we’ll be proposed tomorrow: that it makes no sense to have an European Finance Minister without an European Prime Minister. And so on, relentlessly, towards full political unification.”

From the epicentre of the storm, Greece, a comment piece in yesterday’s Ethnos argued that EU leaders must

“overcome national reservations and petty calculations [and start acting as the] responsible leaders of Europe, and not the leaders of Germany, France, or the Netherlands”.

Writing in Portuguese I Informação, a couple of days ago Economist Fernando Gonçalves noted,

“Analysts of all type of quality and character accuse the periphery countries of financial disasters, forgetting that maybe the principal problem of Europe is political…The political stubbornness and lack of minimum common objectives between Europeans, associated with a significant amount of excesses of all orders (including cloaked paternalism) have produced levels of insecurity that profoundly undermine confidence, which is essential for the recovery of the more fragile countries.”