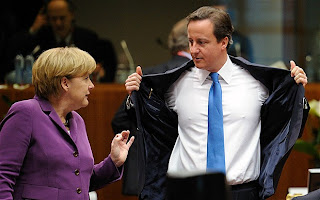 The British press‘ preview of today and tomorrow’s summit has been partly dominated by an expected “row” between Cameron and the EU over a Commission proposal to water down rules on asylum. The fact that this has been covered in almost every paper from The Sun to The Guardian suggests it is a story that the communications folks in Downing Street wanted us to read. The question is why?

The so-called Dublin Regulation allows member states to send failed asylum seekers back to their first country of arrival in the EU. However, the Commission is pushing to be given the power to invoke a suspension clause to prevent people being sent back to certain countries if they are under “exceptional pressures” from a mass influx of migrants, for example.

These are ongoing negotiations on a proposal dating back to 2008, to which the previous government opted in. The current Home Secretary Theresa May said a couple of months ago that, “We oppose the suspension of transfers under the Dublin regulation.” The Labour Government said it was “concerned” about the Commission’s suspension clause at the time of opting in but did so anyway, presumably hoping it would be removed during negotiations.

When Downing Street talks up such a “row”, it is usually fair to expect it to be followed by a “UK win” – the reports today suggest that Cameron has won French backing for his position. And with EU leaders, at the very same summit, set to discuss a tightening up of the border-free Schengen zone after recent influxes of immigrants from North Africa, it would be miraculous indeed if at the same time they decided to relax rules on asylum seekers.

This is not to say this isn’t an issue because the Government could in theory be outvoted as the decision will be taken by QMV (exactly the kind of reason we have been advocating stronger parliamentary scrutiny of opt-in decisions). But what other motives might there be for talking up a UK victory in Europe?

Could it be that Downing Street would rather we didn’t focus on another story perhaps? The Guardian reports today on something that could prove far more explosive for the Government. It quotes German officials saying that the UK will need to contribute to the second Greek bailout, over and above its IMF contributions, through the EFSF, for which the UK is partly liable.

“The German legal situation is clear,” a German official said. “The EFSM should contribute.” Asked whether the UK could veto such a move obliging it to guarantee billions for Greece, the official answered: “I don’t understand the question because the decision is taken by qualified majority vote…Everyone is tied to a QMV decision.”

The Guardian probably got a bit carried away, as we would be very surprised if the EFSM is activated for a second Greek bail-out (much will depend on how much EU leaders can squeeze out of private creditors under any bail-out plan. Absent private sector involvement – or at least the appearance of it – there’s still a risk that the EFSM will have to pick up some of the slack. There’s €11.5bn left in the fund). What is true is that the second Greek bailout is still very much an open game, with the theoretical risk of the activation of the EFSM or otherwise still being decided by a majority vote. But this would create a lot of bad blood. For nearly two weeks now Cameron has been saying the EFSM will not be used but, which leads Tory MEP Dan Hannan to suggest that it is in fact the spat over the ESFM that is the fake row.

In any case, this summit might not give us a whole lot of answers. We’ll know for sure by 11th July, when EU finance ministers will meet to hammer out the exact details of the second Greek bail-out.