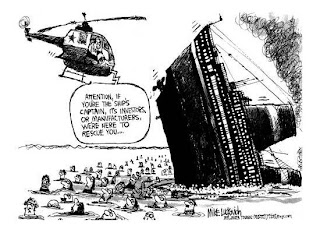 We’ve put out a new briefing on the potential second Greek bailout and the cost of a Greek debt restructuring this morning. See here for the full report, but here are some of the key points:

– EU member states have in total amassed quantifiable exposure to Greece of €311bn (via their banking sectors, the bail-out packages and the ECB’s liquidity programme). France and Germany have exposure of €82bn and €84bn respectively, while the UK only has €10.35bn exposure (in direct exposures).

– In a best case scenario, to carry Greece over until 2014 a second bail-out would have to cover a funding gap of at least €122 billion. This includes Greece receiving the full amount of the original bailout as well as meeting its deficit targets and privatisation commitments. If these fail the funding needs could rise to €166bn, potentially requiring Greece to make a third request for external aid.

– The cost of restructuring will also increase with time, as Greece’s debt burden will only rise over the next few years. To bring down Greece’s debt to sustainable levels today, half of it would need to be written off. In 2014, two-thirds of Greece’s debt will need to be written off to have the same effect, meaning a radical increase in the cost to creditors. Put differently, each household in the eurozone today underwrites €535 in Greek debt – by 2014 and following a second bailout, this will have increased to a staggering €1,450 per household. This makes a second Greek bail-out far more politically contentious than any of the existing rescue packages, given the likelihood of debt write-downs with taxpayers footing a huge chunk of the bill.

– Unfortunately, this is a debt crisis and someone will have to take losses. We estimate that the first round effects of a 50% write down on Greece’s debt would cost the European economy between €123bn – €144bn (uncertainty regarding the ECB’s exposure accounts for the range). However, these are only first round losses. It cannot be emphasised enough that the main cost from a debt restructuring comes in the form of contagion and the knock-on effects of losses throughout the European banking system. Although this is a substantial cost, we estimate that in 2014 following a second bailout, a haircut of 69% would be needed, equal to €175bn, to reach the same debt level.

These graphs clearly illustrate why a second Greek bailout is such a difficult political sale. Basically: banks out, taxpayers in. Seriously, does anyone think that this is in any way sustainable? 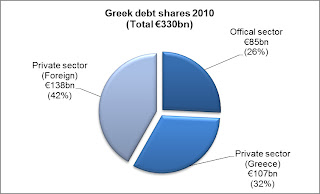 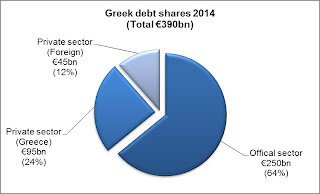