"Nothing can stop us – we will never pay!" 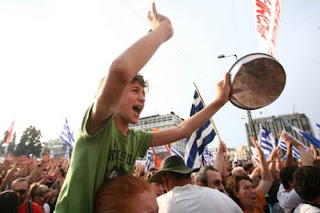 If you’d happened to pass by Syntagma Square in Athens this Sunday – the site of various protests over the last few weeks – you would have had the chance to reflect on the various chants from the Greek protesters frustrated with their government’s/the IMF’s/the EU’s harsh austerity measures.

From the most basic “THIEVES! THIEVES! THIEVES!” (‘kleftes’ in Greek), which according to the Greek media was the most prominent chant a few weeks back, the protesters are now becoming rather more creative in expressing their frustration.

For example, “We’re not going on holiday, we’re not going to the beach, we’ll be here every single day on the Square” (which rhymes in Greek apparently), could be heard around the Square last Sunday.

So could the catchy, “The junta didn’t end in ’73, we’re the ones who’ll bury it in this square”, a reference to the dictatorial Colonel’s regime ruling Greece from 1967 to 1974 (In Greek, “73” rhymes with “square” so was the natural choice for the protesters, despite the slight historical inaccuracy). “Their Parliament will become their prison!” was another popular one, although it’s not exactly clear who “they” refers to. For those wanting to get straight to the point, the “Nothing will stop us – we will never pay” chant was another option. Happily, protesters seem to have dropped a previous minority favourite – “Politicians! Politicians! Come out, we are going to eat you!” – which, despite possessing a certain immediacy, might be a bit over the top (especially in translation).

According to recent reports, there were fewer protesters around than on previous Sundays, but, according to the protesters themselves, this was due to heavy rainfall. Others point to the fact that yesterday was a Bank Holiday Monday in Greece, and many people chose to enjoy the 3-day weekend away from the city.

After all, austerity protests or otherwise, a holiday is a holiday.