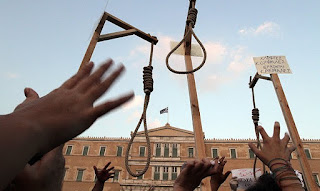 According to some reports, between 80,000 and 100,000 people took to the streets of Athens yesterday in the 12th day of protests against the government’s ongoing austerity drive, as dictated by the EU and the IMF.

Crowds have pledged to continue protesting until the government reacts, but with a second bailout under design with even harsher austerity conditions set to come, the government’s room for manoeuvre is limited, at best. 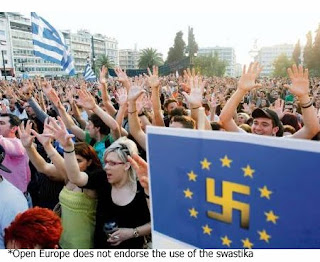 Kathimerini reports that a group of protestors last week blocked 60 Greek and foreign parliamentarians in a restaurant. The MPs had to be escorted away from the restaurant by police on a boat. While some Hellenic hell raisers are to be seen with banners dipicting the the European flag with a swastika set between the twelve stars.

And Greece is not alone. The past few months have seen protesters take to the streets in countries across Europe. Austerity is usually an unpopular move, especially when it’s imposed from above, by officials people have never voted for and can’t vote out of office. And even more so when the policies may not even work (i.e. the bail-outs). 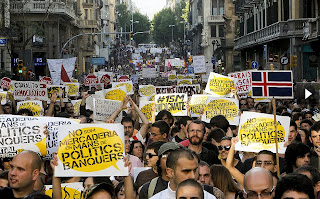 On 15 May the Movimiento 15-M, otherwise known as the Real Democracy Now movement, saw some 25,000 protest in 50 cities across Spain. With youth unemployment reaching 40% and an economy trapped in the euro’s uncompetitive periphery, there’s little prospect of any improvement soon – though Spain is doing some things right. The next big rally is planned for 19 June.

And people in Portugal and Ireland aren’t exactly happy either.

So far, EU leaders have been gambling on these protests being manageable. But with the eurozone facing a long, hot summer of discontempt, the question on everyone’s lips is how much more can the people take? And what happens if they reach the boiling point?