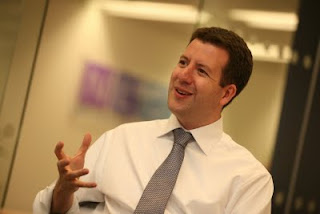 The Guardian yesterday reported that Labour MPs are considering working “with parliamentarians from any party” to limit Britain’s involvement in future eurozone bail-outs, in what appears to be an invitation to Tory eurosceptics. Although its demands remain unclear, Labour seems to have in mind some sort of stronger assurance that the UK will be excluded from the permanent eurozone bail-out mechanism (the ESM) and not implicated in further bail-outs from now until 2013 (when the temporary eurozone-only mechanism, the EFSF, expires, alongside the EU-wide EFSM, though the latter’s expiration is actually not in writing anywhere).

In essence, it is an attempt by Labour to cause some problems for the Coalition, although, if this involves some Labour MPs genuinely wanting to push the Coalition to take a more proactive approach in Europe, that’s probably good news. We don’t doubt that many Labour MPs are genuinely starting to worry about where the EU is heading.

But Chris Leslie, the shadow Treasury spokesman responsible for Europe, seems to have got his figures slightly wrong (and the Guardian doesn’t seem that interested in getting to the bottom of the issue). This is how the Guardian writes it up:

“Chris Leslie, the shadow Treasury spokesman responsible for Europe, told the Guardian: ‘We will be quite prepared to work with parliamentarians from any party to make sure the funds to protect eurozone members is not drawn disproportionately from funds to which Britain contributes. We have already provided more than our fair share.

‘We will also work with anyone to make sure the government acts more quickly to introduce a permanent mechanism that draws on only eurozone members.’

He claimed the EFSM had shouldered a third of the bailout costs, even though it was due to provide only 12%.”

Leaving aside that it was the former Labour government that actually signed up to the bail-out fund which involves all EU members (the EFSM) – albeit after having consulted the current Chancellor – the 12% seems to have been plucked from thin air. Does Leslie mean that the EFSM (worth €60bn) amounts to roughly 12% of the total eurozone bailout funds, which including the eurozone-only EFSF (€440bn) total €500bn? If so, we’re not aware of any rule, written or otherwise, that states that the EFSM is to be used in a way that mirrors its size relative to the EFSF. In any case, combined with the money from the International Monetary Fund (one third of whatever the EU puts up), the 12% figure makes even less sense.

Or Leslie could perhaps be referring to the UK’s liabilities under the EFSM (which according to some accounts are around 12%). In fact, this figure varies as it’s based on the UK’s share of the EU budget which alters annually (the most recent figure we got from the Treasury is nearer 14%). Again, this makes no sense as the figure refers to a liability specific to the UK, not the EFSM as a whole.

So, either Labour is spinning pretty heavily or it doesn’t quite grasp the figures.

Why does this acronym-heavy discussion matter? Because a) far too few people who should know better actually understand what’s going on, b) with a potential second Greek bail-out looming, there’s a growing risk that the bail-out mechanisms are being used to fund governments that will have to default anyway, meaning that loan guarantees turn into losses for taxpayers. If European politicians don’t understand the dynamics at work, they’re in for an unpleasant surprise (at a time when populism is on the rise in Europe) and c) to say that the EFSM was ever limited to a specific share of the bail-out is to misunderstand the crucial point: the EFSM is decided by majority voting, meaning that it can take on a life of its own. The lesson here is don’t give up EU vetoes.