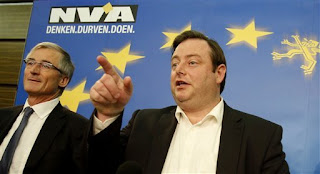 In De Standaard, Bart De Wever (photo), leader of Flemish nationalist party N-VA – Belgium’s biggest party – has defended his decision to give an introduction to a speech made by Czech President Václav Klaus during a Belgian state visit. Klaus, as you know, isn’t exactly the most popular head of state in Brussels circles.

“Whoever expresses criticism of the europhile mentaility of the political elite is being labelled an ideological ally of the far right.

In an infamous speech at the European Parliament in 2009, Klaus committed the cardinal sin by sharply criticising the lack of democracy at the EU level, even comparing the EU to the Soviet Union. When someone who has physically experienced the struggle for political freedom and sovereignty of the people, speaks about Europe in such a way, we should at least be expected to take his criticism seriously. Instead of taking advantage of an opportunity to engage in a big debate on the European project, Klaus was being dismissed as a political pariah.”

“whoever honestly believes in European integration, will need to learn to listen to its critics. Lashing out at anyone who doesn’t believe in the europhile dream of a United States of Europe, advocated by smooth statesmen and journalists, really doesn’t cut it any longer if we wish to convince public opinion. In order to counter the opinion of Klaus and to avoid the European project from turning into something resembling not much more than a free trade area, we need euro-realist answers. And we need grands messieurs et mesdames willing to sell those ideas.”

Not the usual stuff coming out of Belgium, to say at least.