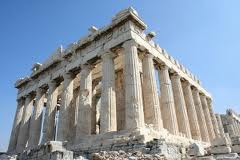 Well, one year and hundreds of basis points later (the yields on Greek government bonds have soared from 9% last year to 17% this year, with prices moving in the opposite direction), investors who followed Handelsblatt’s advice must feel somewhat jaded. Many have taken pretty hefty losses – unless they’ve dared to hold on to their bonds in the hope of better times. Hans-Werner Sinn, head of IFO Institute for Economic Research, put it well:

“It’s okay to be partial for Greece. But I cannot recommend buying Greek government bonds in good conscience. Instead, I would recommend vacationing in Greece. That way, you know you’ll get something in return for your money.”

Given the upcoming sale of Greek public assets, maybe Handelsblatt will run the headline ‘We’re buying Greek assets’…although we’d expect that they and many other investors are going to be a bit less bullish this time around (raising the interesting question of who will actually buy these Greek assets?)