Is Christine the answer? 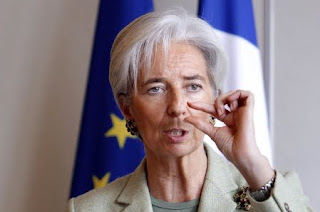 With it being a relatively slow news day, much of the economic and political commentariat has focussed on who ought to and/or has a chance of replacing Dominique Strauss-Kahn as IMF chief. Everyone seems to have an opinion on this; there have been some sensible suggestions, and some totally left-field ones, such as Martin Kettle’s pitch for Peter Mandelson.

Much of the debate has centred around the issue of whether he or she ought to be European, or whether it was time for an emerging economy to take over the helm of the IMF, with China, Brazil and Turkey all pushing for a non-EU IMF chief. Allister Heath made a good point in his City AM column:

“the European-led IMF was always perfectly happy to force much harsher policies on emerging countries. These days, however, it is the Asian and other emerging nations that have put their houses in order and Europe and the US that continue to spend money they don’t have.”

However, as we know, Europe tends to prefer the status quo (regardless of whether the status quo is actually a good thing) and France’s finance minister Christine Lagarde has emerged as a clear favourite.

So is she the right person for the job?

We’re sceptical. Yes, she speaks polished English, more Oxford than the typical thick French statesman’s accent, which in combination with her background at US financial firms, give her some street cred in the anglo-saxon world (which is enough for the BBC to love her). And she has done a relatively good job in keeping the French economy stable. However, she’s nonetheless firmly wedded to what can be described as the ‘bailout consensus’ and state intervetion which as we have pointed out multiple times is a blind alley, and there are plenty of people out there who seem to agree.

“Lagarde is rooted in the French tradition, that when in doubt, one ought to argue for more coordination rather than for more competition. She is the advocate in chief for unbridled state assistance, and does not want private creditors to participate in the rescue of insolvent eurozone countries.”

“Impressive as she is, the French finance minister is… too steeped in the EU establishment and too much part of the French elite to be able to abandon the euro as an article of faith. For a clear-headed, dispassionate Singaporean, let us say, the decision on recommending that Greece leaves the euro would be a much less traumatic affair. And even if that were not the case, we might still be better off with someone for whom the idea that they are a Sarko crony could never stray into our minds. So while it is true that Ms Lagarde knows the eurozone’s funny little ways, she might also be more blind to its failings.”

In fact, the IMF would probably benefit from having someone from outside of the eurozone’s political elite, not least since large parts of this elite – as we have documented – consistently failed to grasp how the single currency would work in practice, and has mis-judged the crisis ever since it broke.

Ultimately, whether this person is European or not is actually of secondary importance.