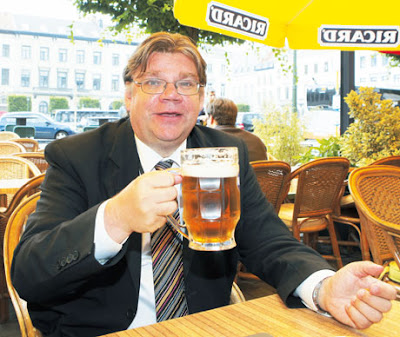 Last week, the True Finns announced that it could not participate in a Coalition government that supported the bail-out of Portugal, its opposition to which was a key plank of the party’s election manifesto. Announcing the decision, True Finns leader Timo Soini said, “It would have been nice to be part of the government but you cannot betray yourself.”

Soini may have passed up on power, but his decision seems to have gone down well with voters. In an opinion poll carried out at the end of last week – when it had already become clear that the True Finns would not join the government due to the Portugal bail-out – the party got 22.4%, beating its election score by over 2% and making it the biggest party for the first time. It is trailed by the National Coalition Party on 20.6%, the Social Democrats on 18.6% and the Centre Party on 14.4%.

At this rate – particularly if the eurozone continues to deteriorate, requiring more bail-outs – Soini could become absolutely lethal in four years’ time. It’s that tension again, inherent in the eurozone structure – political ambition vs national democracy vs. economics…

On a separate note – irrespective of what we think of the True Finns – there’s an interesting contrast here to a certain UK party, which, upon joining a Coalition government as a junior partner dropped from 23% at the election to 18% just over a month later and falling even lower this year.