You call that austerity? 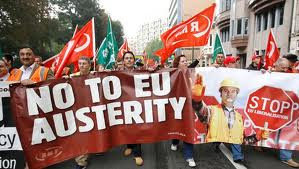 We imagine that will be the response by many in Athens and Dublin to the conditions which have been announced along with the €78bn bailout deal for Portugal. Jose Socrates, the caretaker Portuguese PM, was almost boasting on TV last night about how much more favourable the terms were for Portugal compared to Greece and Ireland. In the cold light of day though, most of the details we’ve seen so far focus on what won’t happen rather than what will, raising the question: Where are the necessary savings actually going to come from? That should be slightly concerning for taxpayers across the EU.

The point that has attracted most attention is the easing of the deficit cutting programme. But in actual fact the targeted cut is higher than before, given the change in the level of the deficit.

Most observers, including us, didn’t expect Portugal to be able to achieve its original level of cuts, let alone a higher level – especially when combined with lower growth prospects. That was before we even found out what was not going to be cut…

According to Socrates the conditions will not include cuts to: minimum wages, public sector pay, education spending and healthcare. In addition, there will be no additional public sector job cuts and the retirement age will not be increased. That is a huge list of things that will be left untouched, especially since savings of 3.2% of GDP are expected.

So, seriously, where is the money coming from?

Well, there are expected to be some, limited, cuts to higher scale state pensions as well as a decrease in the amount and duration of unemployment benefit. There is also a plan to raise VAT on electricity. In terms of increasing revenue, there was talk of privatising €5.3bn in public assets but not Caixa Geral de Depositos, the largest credit institution, which was widely expected to be sold to raise funds. So all in all not exactly an earth-shattering plan for saving 3.2% of GDP.

To be fair, there are more details and plans to be announced but considering what has already been taken off the table we’re not overly optimistic.

Admittedly, too much austerity would definitely be bad for the economy and finding the right balance is a hard line to tread. But for those of us who already believe the bailouts to be a waste of money, since they won’t solve any of the long term problems, these kinds of conditions are almost just adding insult to injury.