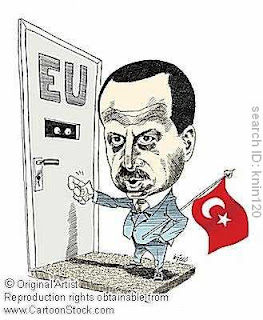 As Europe limps along economically and struggles to speak with a single voice on… well almost anything, and at a time when the EU’s two flagship projects – free movement and the single currency – are coming under massive strains, the contrast between the bloc and perennial candidate country Turkey could not be starker.
In 2010, the EU-27’s GDP grew by 1.8%, while in comparison, Turkey’s GDP grew by 8.2% over the same period (and by a phenomenal 150% since 2003), with steady growth of 4.6% projected for 2011. In parallel to its strong economic performance, Turkey is also becoming increasingly self-assertive on the world stage, most notably when, together with Brazil, it took the diplomatic initiative over the Iranian nuclear programme last year.

It now seems as if the increasingly confident Turks are turning against the idea of EU membership. Only 38% expressed support for the idea last year, compared with 73% in 2004. That’s a spectacular drop.

Should this be of concern to the EU? Most definitely.

Irrespective of the pro and cons of Turkey joining the EU, Brussels’ approach to this issue really represents the worst of all worlds. By constantly sending mixed signals about whether or not Turkey is in fact welcome – the EU risks antagonising a country that it really needs on side. Do you really want to tick off a country that is up and coming, possessing a huge market (that Europe’s struggling economy desperately needs) – and whose geo-strategic importance is second to none?

France in particular, but also to some extent Germany, have not exactly encouraged the country’s attempt to gain full EU membership despite the fact that Turkey has been an official candidate country since 1999 and in accession talks since 2005. You’d forgive Turks for feeling insulted by being messed around by the EU. This is now reflected in Turkish public opinion.

The problem with the EU’s mixed-signals approach is that it could push Ankara in to the arms of far less pleasant countries, such as Iran. That would be a spectacular own goal for Europe.

It is also possible that full EU membership is becoming less appealing for the Turks for other reasons. A union in which debt is being past around and several countries are on the dole – and control over a country’s political and economic future is partly in other peoples’ hands – just isn’t that attractive. While many in Europe are worried they would end up having to subsidise Turks, the idea of being asked to bail out troubled eurozone members (least of all Greece!), can hardly be appealing to the Turks either.

But there’s another side to this which is often overlooked. Just as the EU has in the past acted as a driving force behind modernisation and reform in Turkey (albeit with mixed results), so Turkey could contribute to some badly needed reforms in the EU. An EU which has Turkey as a full member simply would have to withdraw from some crucial policy areas where it has over-stepped its mark in the past. Justice and Home affairs for example, where EU integration has made some quantum leaps over the last few years. Or the Common Agricultural Policy, which would probably implode if Turkey were to join, or the Structural Funds, or the excessive use of Qualified Majority Voting (as Turkey would instantly become the most powerful country in the Council of Ministers due to its size). In other words, Turkey’s size and composition could in fact be a strong argument in favour of the country joining – at least for those of us who want to see some real and radical EU reform.

In fact, the UK of all member states ought to consider the strategic benefits of using the issue to build momentum for institutional reform within the EU. The EU could also draw lessons from Turkey’s dynamic economic performance which will be crucial to the continent’s future prosperity, especially in the context of Europe’s looming demographic crisis. Clearly, there are significant problems with the Turkish candidature that would have to be overcome, from the Cyprus issue to the status of the Kurdish minority, so it is important not to jump the gun here.

But for politicians – in the UK and beyond – ruling out the prospect of Turkey of tomorrow joining the EU of tomorrow would be a pretty serious mistake.