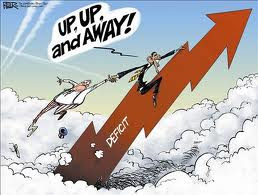 That’s been the story with Greece’s debt and deficit figures for some time, particularly since it’s become almost customary for the figures to receive at least one upward revision on their original estimates. However, Eurostat’s latest figures suggest the problem (of missing targets) looks to be spreading to other peripheral eurozone countries (not that the spotlight isn’t still firmly on Greece).

Eurostat yesterday released its debt and deficit data for 2010 and it included some interesting revisions – upwards as always. Starting with Greece, we see that the government missed its deficit target by 1.1% of GDP (all % are of GDP from now on), coming in at 10.5% instead of the 9.4% which the Greek government proudly predicted in January. To be fair, this still means the deficit fell by around 5% last year, but the figures show that less than 2% of the decrease came from increased revenue. Things continue to look bad for Greece, as we, amongst others, struggle to see where the government will find the money it needs. The programme of spending cuts is already pushing austerity to its limit and the government just doesn’t seem to be able to increase revenue (tax evasion is still massive but the ongoing recession, which is worsened by the austerity, just makes tackling it all the more difficult).

Meanwhile, Portugal also saw its deficit revised upward for the second time in a matter of months. It now stands at 9.1%, way above the government’s estimate of 7.3%. The government still put the difference down to changes in accounting rules enforced by the EU, although it is strange that it seems to affect Portugal so much more than anyone else…in any case Portugal now needs to cut the deficit by close to 5% to meet its target for 2011. Its debt burden was also increased, putting it at 93% in 2010.

Ireland fortunately didn’t see its deficit or debt estimate revised, although with the deficit coming in at a whopping 32.4% this isn’t much of a consolation (most of the deficit is down to the bank bailouts, but even excluding them the deficit was around 12% – the highest in the eurozone).

All in all the figures weren’t exactly expected to be encouraging but the continuing string of upward revisions and missed targets doesn’t exactly inspire confidence.