The terminator for EU President? 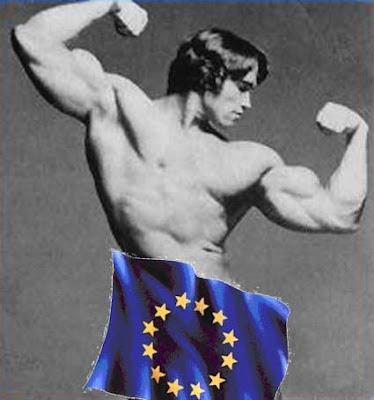 This is a bit risqué (or the picture at least), but latest on the grapevine is that Arnie ‘I’ll be back’ Schwarzenegger could be eyeing up his chances as next European Council President.

According to his chief of staff, “In the next few years, the EU will be looking for a much more high-profile president – somebody who can unify Europe”.

To go from being Governor of California to EU President would arguably be a bit of a fall from grace. Despite the attractive pay packet, it’s difficult to see what would possess anyone to want to take over from Herman Van Rompuy.

All the same, Arnie evidently has valuable experience in dealing with huge levels of public debts (in terms of running up its credit card, California could compete with the likes of Greece and Ireland, though not quite as bad). And given the pretty bad shape the EU is in, the Austrian giant could hardly make things worse.

But despite Arnie’s obvious talents and dedication to politics (cue photo), we can forsee certain problems in his bid. Though he might go down well with voters, alas, it’s the EU leaders he’ll have to convince (and they don’t like to be overshadowed by people with personality, hence Van Rompuy). Perhaps a change in rules would help him out? God forbid suggesting that the post should be democratically elected, so how about an arts and crafts contest – haiku reading versus wooden acting?