Commission utterly confused by its own aid figures

Our recent aid report has kicked off a bit of a storm in the Netherlands.

Nieuws.nl reports this evening that a debate will be held in the Dutch Parliament, the Tweede Kamer, on EU aid spending at the request of a PVV MP, with the support of the governing VVD and CDA, as well as the Socialists. Dutch MPs are asking why EU external aid has been spent on various projects cited in our report, including €463,ooo in funding for a dance project in Burkina Faso, and by what Sunday Times‘ journalists found in Sierra Leone.

Meanwhile, the Commission is particularly sensitive about this issue. We’re reliably informed that its press officers are briefing journalists that our main criticism – that only 46% of EU development aid reaches lower income countries – is unfair and inaccurate as it includes EU aid that is not meant for development (The 46% of EU aid targeted at lower income countries compares with 74% of UK aid using the same methodology).

The Commission has been saying, although not yet in public, that money spent in Europe’s neighbourhood cannot be considered development aid in the same sense as aid to sub-Saharan Africa, for example.

To get technical, what this boils down to is how much aid is classified as “Official Development Assistance” (ODA) – a classification used by the OECD’s Development Assistance Committee to categorise external aid spending that has “promotion of economic development and welfare as the main objective”. ODA only includes money granted to what the OECD classifies as “developing countries”.

Now we are particularly puzzled as to what the Commission is playing at on this one as our findings simply bear out the facts contained in their own figures. The Commission’s 2010 Annual Report on External Assistance, which looks at funds spent in 2009, lays it all out very clearly in black and white (the key financial tables are from p168 onwards). In the Commission’s own words,

So, of the EU’s €12,298m 2009 aid budget, €11,764m was considered as reportable as ODA or development aid. And to be clear, this includes the majority of money spent in European countries under the so-called European Neighbourhood Policy, for example. Table 6.3 (on p170 of the report) clearly shows that of the €1,463m spent on the “European Neighbourhood Policy and Relations with Russia”, €1,356m was considered by the Commission as ODA (click the table below to enlarge). 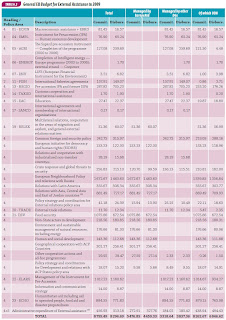 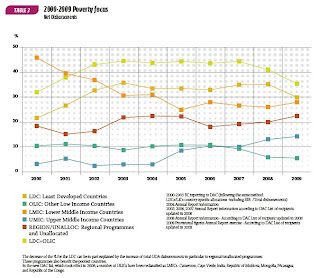 The green line at the top combines EU ODA spent in what the OECD considers to be “Least Developed Countries” and “Other Low Income Countries”, which dips to about 35% of EU aid disbursed in 2009 (if you’re wondering why our figure is a higher percentage, it’s because we have taken the EU’s spending in lower income countries as a share of “allocable ODA” rather than total ODA spending, which includes aid that can’t be allocated to countries using an income category).

In its 2011 multilateral aid review (p170), the UK’s Department for International Development said of the Commission’s central aid budget that, “Although almost all budget instrument spend is classified as ODA, none of the budget instruments, except for the DCI geographic programmes and most of its thematic programmes, are purely development focused.”

So, unless the Commission is saying that its own figures are wrong or can explain why this (its own) methodology is no longer valid, we don’t know what other conclusion can be drawn from the figures – they’re there in black and white in the Commission’s own documents. It’s not our fault if the Commission reports something as development aid which it doesn’t consider development aid (it doesn’t exactly inspire confidence but that’s a different discussion).

Frankly, what in the world is the Commission on about?