First to the Finnish line 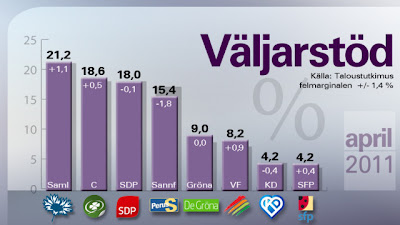 This is a graph showing the support for the different parties, according to a poll published last night, ahead of the Finnish national elections on Sunday. All international eyes are on the True Finns (fourth from the left) – the party that has said it opposes a bail-out deal for Portugal and putting any more cash on the table for struggling eurozone economies. In fact, the party doesn’t want to be in the euro at all.

A lot has been said about the True Finns, with the European media all of a sudden forced to become experts on Finnish national politics – it has to be said with varying degrees of success. That many still refer to the True Finns as a “right wing” party indicates the need for a bit more analysis and a bit less reliance on labels that are flying around. The party is pretty skilfully moving along the right-left scale. It’s effectively social democratic on economic and welfare issues, favouring a big state, combined with a pretty clear socially conservative flavour. It’s definitely populist and not exactly enthusiastic about immigration (and this in a country which accepts some of the fewest migrants in Europe).

So what will happen on Sunday? We wouldn’t bet our money on any player. The True Finns have seen a drop in support recently – 15.4% in the poll published yesterday, down from 17.2% a month ago. The National Coalition Party extended its lead to 21.2% in yesterday’s poll, while the Centre Party was the second largest party at 18.6%. The Social Democrats were at 18%. The Nordic bookies don’t think the True Finns will make it into government and will give you 2.10 times your money for a bet on them winning ministerial seats, while a bet on them not making it only gives you 1.65 times your money.

Regardless, the True Finns are likely to make huge gains compared to the last elections in which they scored just over 4% (see the rise of the True Finns here, in yellow). And a second thing to remember, the Social Democrats – currently at 18% – have also expressed pretty clear opposition to a Portuguese bail-out, instead arguing for a restructuring. Between them, the two parties could well reach above 30% – that’s a pretty powerful anti-bail-out bloc. As we’ve noted before, this could potentially hugely complicate a Portuguese bail-out, as well as efforts to top up the temporary bail-out fund (EFSM) and cash injections in to the permanent rescue mechanism (EFM).

The elections in Finland have made people – not least many opinion formers – start to realise that, shock horror, ultimately the eurozone is about politics. And as we know all politics is local.

In fact, it’s difficult to find a more conspicuous example of the inherent flaws of the eurozone – the idea that political ambition can stamp out both economic and democratic realities – coming up against the full force of national democracy.