A new opinion poll shows that Austrian, anti-immigrant, populist party FPÖ would end up on top if elections were held today, beating both the social democratic SPÖ and conservative ÖVP. There are of course multiple reasons for the party’s rise, but we note that FPÖ leader Heinz-Christian Strachewhich last week slammed Austria’s participation in, and the cost of, eurozone bail-outs. “Thank you, [Austrian Chancellor] Werner Faymannm,” he said sarcastically. 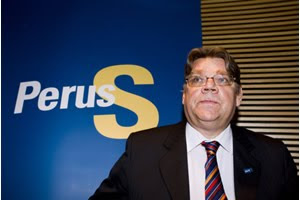 In Finland, the “True Finns” party, under the leadership of Timo Soini (pictured), has seemingly come from nowhere and transformed itself into a full-scale political force. A recent opinion poll put it second, ahead of this month’s national elections. Though not nearly as bad as FPÖ, it does run on a highly populist platform with a strong anti-euro flavour. The party was almost single-handedly responsible for derailing the EU deal on how to increase the size of the eurozone’s bailout fund, the EFSF. The decision is now postponed until June, after the Finnish elections. And as Jan Sundberg, Professor at University of Helisnki puts it, “Portugal crashing would be a gift to the True Finns”.

In the Netherlands, the government does not have a majority in Parliament, but has to rely on Geert Wilders’ Party for Freedom, which is the third largest party in the country. Wilders has also spoken out against the euro-bailouts. So far, the Dutch government has relied on the other Dutch opposition parties to get its EU measures though parliament.

In France, far-right Front National leader Marine Le Pen is gaining popularity, and one poll even showed her ahead of all other candidates ahead of next year’s Presidential elections. Le Pen has called for France to leave the eurozone, along with Spain, Greece and Portugal, saying:

“They promised us that this currency would bring growth and welfare, and what happened? People were destroyed, we are talking about a real tragedy. Look at what happened to Greece.”

Again, there are numerous factors at work here – and we should be careful to over-simplify or generalise – but it’s hard not to detect a worrying trend: four of the eurozone’s main creditor countries (and incidentally net contributors to the EU budget), which are underwriting struggling euro governments’ debt to the tune of hundreds of billions, are experiencing a dramatic surge in support for populist parties. These parties would not only reject the bail-outs and the Single Currency but also, in all likelihood, the EU itself.

So what about the big kid on the block: Germany?

Germany doesn’t really have its own version of the populist parties we see in other parts of Europe – on the left, Die Linke might fit part of the bill, but it’s still not quite the same. Therefore, there’s no real political platform for the kind of aggressive anti-euro sentiments that we see in Austria for example (which also plays on anti-immigration and anti-incumbency) – and there’s unlikely to be one in the immediate future.

It’s clear, however, that German public opinion is growing increasingly wary of the direction of the euro. Slowly, these sentiments are beginning to trickle through to party politics. The motion which was passed by a near-unanimous German Parliament asking Merkel to backtrack on an agreement between eurozone leaders, is one example (though it shouldn’t be overstated either). But there clearly is a vacuum in EU politics in terms of voicing alternative visions for the direction of the Single Currency and the EU – and a mismatch between public opinion and the political class.

Writing in FTD last week, Wolfgang Münchau – who, until recently, was the arch-optimist amongst eurozone commentators – argued that “a right-wing spot is free” in Germany. He suggested that the liberal FDP will fill the vacuum and turn into a ‘eurosceptic’ party. Perhaps. If so, the hope is that the FDP could transform itself into a sensible, EU reformist party, pushing for the revolutionary idea (yes, sarcasm) that the single currency and the EU should be based on sound economics and democracy. Such an outcome would benefit both Germany and Europe.

The fear, as ever, is that the vacuum will be filled by other, nastier political forces.

A Europe in which populist, anti-immigrant parties hold strong positions in creditor (or triple A countries), while far-left parties gain prominence in debtor nations such as Greece or Portugal, would really be the worst of all worlds.

But if Europe’s mainstream politicians continue to stick their heads in the sand, and refuse to speak about the problems facing the eurozone – they should not be surprised if voters turn to the parties that do engage in some straight talking, however flawed or nasty such talk may be.

Mainstream political parties and their leaders got it spectacularly wrong on the euro in the past. Perhaps it’s time to think about some more fundamental solutions to the eurozone’s problems?