Emerald Isle stress tests get a gold star (for now) 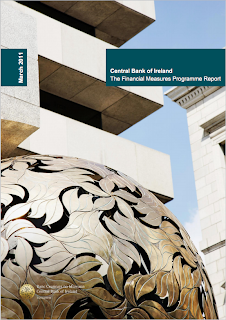 Yesterday afternoon Ireland announced the results of its recent round of banking stress tests. They showed that the banks need €24bn to recapitalise; that is undoubtedly a huge number for an economy the size of Ireland’s. So why are investors not running for the hills?

Well, from our perspective at least, the Irish stress tests seem to do something that none of the ones that have gone before have – make a genuine attempt to fully estimate the potential losses which banks could face.

This is a good start and the stress tests should be commended, but more important is how the banks and the government respond to the results. Unfortunately, that has been less commendable.

The government was expected to announce a series of measures to raise the necessary capital and set the banks on a sustainable course. However, there was only talk of ‘some’ capital being raised by investors and private lenders, with the main chunk expected to still come from the €35bn allotted to the banks by the original Irish bailout. There was also no mention of bondholders taking losses or of the widely reported new ECB medium term liquidity mechanism. So what we have is some more clarity of the state of Irish banks – which is good – but we’re still missing a solid, revised plan to to address the mess.

The response of the banks was also slightly worrisome. Both AIB and Irish L&P suggested that their losses will not be as high as estimated due to the nature of the Irish mortgage market and real estate sector. This is essentially a reference to forbearance – when a lender allows a borrower extra time to repay a mortgage rather than foreclosing on the property. This allows the lenders to delay the realisation of losses, while giving the impression that the extra time given is designed to give a break to struggling taxpayers. Whatever the motivation, this is only a short term policy and, unless the Irish economy has a miraculous turnaround, most borrowers will be unable to repay these loans despite an extension in maturity.

Lastly there is the issue of the deleveraging – the sale of assets to bring the deposit-to-loan ratio back to a sustainable level – or as some people are terming it, the ‘fire sale’. Irish banks will need to shed €72bn of assets by 2013, which is a massive amount to dump into fragile financial markets. The losses on these assets will, in many cases, be substantial although the stress tests claimed to have accounted for this. Whether or not they were fully able to accurately predict the market value of some of these assets, especially since they will be sold over time, remains to be seen.

So a gold star for the stress tests (relatively at least) but they’re only a start. How the government and banks respond will deter whether Irish banks can recover quickly or whether markets will lose faith in them completely – meaning that an Irish restructering and/or another bail-out could be around the corner.