With the eurozone destined for years of navel-gazing, as it struggles through the current sovereign debt and banking crisis, the UK is actually very well placed to push for EU reform. Its own economic challenges aside, Britain now has a chance to use the debt and competitiveness predicament facing several European countries and the EU as a whole as a springboard to get Europe back on the road to growth.

In other words, this could be turned into a benign crisis for those of us who are in favour of a growing and competitive Europe (it’s hard to argue that Europe doesn’t need reform when several countries are on the verge of bankruptcy).

Encouragingly, Downing Street has moved today to try and push this agenda, with a new initiative entitled “Let’s choose growth” – and there’s lots of good stuff in there (and the format is refreshingly innovative and easy to grasp, including this You Tube clip). Besides the proposals to liberalise the single market further, by creating a common market for digital and service industries and calling for deregulation, there also seems to be an emphasis on ‘shock therapy’. Cameron and Co have made it plain to EU leaders that standing still is not an option as the rest of the world moves on. 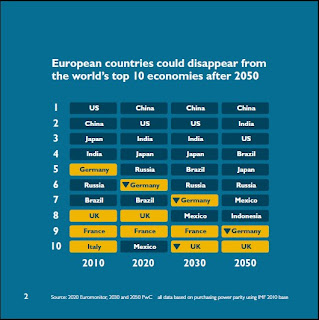 This chart should be all the motivation Europe needs. As you can see, by 2050, only Germany and the UK are predicted to remain among the world’s economic elite, and they will only be hanging on to the bottom two rungs of the ladder.

The rise of the likes of China, India and Brazil is inevitable but this is no excuse for Europe to give up. The big question however is whether the UK and other like-minded governments, such as the Scandinavians, the Dutch and the Czechs, will be able to keep the eurozone’s attention long enough to make the point.

For this to happen, the British government needs to roll up its sleeves and get down to business: form alliances (cultivate, cultivate, cultivate the Scandies, new members – and the biggest prize of them all – Germany), horse-trade, manage the European Parliament, convince through pursuing best practice at home (such as the ‘Better Regulation agenda’, and a strong, healthy economy), on EU proposals get in early and get in low – but be tougher and shrewder when negotiations get rowdy.

Downing Street should be given credit for raising its game on EU reform. But now it must show it can turn a catchy pamphlet into concrete action.