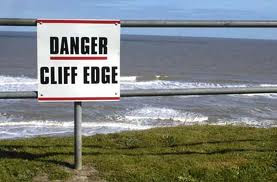 In a speech in Oslo today, EU President Herman Van Rompuy talked about the sound fundamentals of eurozone economies. He references the average growth of 2%, the average deficit of 4.5% and the strength of the euro as evidence for his claim.

To his mind these are the “basic facts“.

Well, we think it might be worth reminding him of the basic nature of averages. If you have two very divergent groups (the core vs. periphery eurozone economies) the average will be somewhere in the middle and will be of little use – it may even be misleading.

Take two people, one about to fall off a cliff (Greece, Ireland, and Portugal) and another standing a fair distance away (Germany, Finland etc), on average their position from the edge of the cliff will not sound too bad but this misses the point that one of them is in dire straits. Add to this analogy the fact that the two are tied together by a rope (the single currency), and the situation clearly is not how it sounds under Rompuy’s becalming “basic facts” scenario.

As for the strong euro, this is another misleading point. It is being maintained by the spectre of imminent ECB rate rises, which would be detrimental to many of the peripheral eurozone economies – due to high private debt and lack of lending in the economy (not to mention encouraging further current account deficits). In our scenario this introduces a third person (the ECB) who is chipping away at the cliff beneath the first person’s feet (precipitating their fall).

To convey the basic facts of a system as complex as the eurozone you need to go deeper than averages.