MEP claims he is innocent of corruption, just guilty of vanity 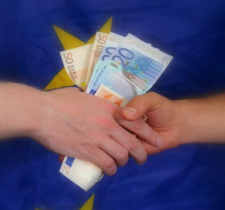 The Sunday Times’ expose has certainly shaken the bees nest at the European Parliament. So far four MEPs have been caught out, on video, agreeing to table amendments to EU directives in return for the promise of cash. However, despite being caught well and truly with their hands in the till, two MEPs are still professing their innocence to the charges and refuse to step down.

The latest to be busted is the Spanish MEP Pablo Zalban, who seems intent on bringing down the reputation of the European Parliament and his EPP party in the process.

In a comment revealing of his integrity, he told El Mundo yesterday that he met with the journalists posing as lobbyists “because I am well mannered” and also because the undercover journalist “was very good looking”.

After three meetings, Zalban actually put forward one amendment, out of two, that the undercover journalists suggested.

“One of these I rejected, but the second, after consulting with the assistants from the EPP, we thought it would enrich and improve the report because it protects small investors and goes in the same direction of consumer associations, and for this I incorporated it”, he said.

What will concern many is that Zalban claims that he acted “in all moments under the norms of the European Parliament” but was a victim of a “trap”.