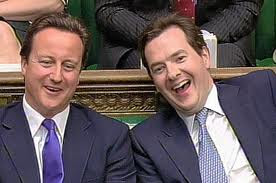 Alistair Darling hit out at David Cameron and George Osborne today for trying to put all the blame for the UK’s participation in the €60bn European bailout fund (the EFSM) onto the previous Labour government.

“When you referred to the discussions that took place in May of last year in relation to the eurozone fund, you gave a somewhat incomplete account of my conversation with the now Chancellor (George Osborne),”

“We did indeed agree that we should do everything we could to keep Britain out of the main part of the rescue fund.

“But in relation to the smaller element [the EFSM] which you refer to, what we discussed was not voting against but abstention, recognising that Britain could have been out-voted – exactly the same thing that the Chancellor referred to when dealing with Ireland.”

It has been known for some time that Darling consulted Osborne before effectively nodding through the deal, but this is the first time the former has gone public with what actually happened during that extraordinarily eventful weekend back in May. Cameron and Osborne may argue that they could have been outvoted and dragged into the bailout fund anyway, but that’s not really the point. By agreeing to abstain – it that’s what they did – and essentially condoning the UK’s participation in the bailout mechanism, they can hardly claim that it was all down to the Labour government and that they’re therefore innocent victims of a deal struck before their time.

This whole situation is indicative of the Coalition’s approach to some of key challenges facing Europe at the moment – steer clear of controversy by shirking responsibility. Well, with a potential Portuguese bailout looming as well as new budget negotiations on the horizon it’s clear that the government will be forced to engage with the EU and make some decisions soon; they would look a whole lot better if they started taking the initiative.

Pushing for an alternative route for Portugal – a restructuring combined with a limited cash injection so that more of the burden fall on investors and less on taxpayers – would be a good place to start.