How much longer can the eurozone live an alternate reality? 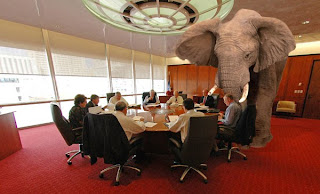 This week’s fun and games are over, with EU leaders concluding their Brussels summit earlier this afternoon.

Once again, this summit is unlikely to be remembered for anything EU leaders could agree on but, rather, for what eurozone leaders, in particular, were unwilling to even discuss. Namely, getting to the root of sorting out the eurozone’s short-to-medium-term future.

As the BBC’s Paul Mason asks on his blog:

Why, within the space of 12 days, do we get a “grand bargain” to create a Euro Stability Mechanism (11 March), which is then (a) knocked back by Finland (b) defied by Portugal (c) renegotiated at the behest of Germany’s FDP coalition partner so they can do a tax giveaway in the coming elections; and (d) excludes Ireland anyway?

Chancellor Angela Merkel’s, and by extension Germany’s, focus on what are, in the grand scheme of things, minor details is starting to betray a worrying resemblance to an obsessive-compulsive’s inability to recognise the bigger and far more important realities in life. Merkel’s two ‘victories’ from this summit appear to be the fact that Germany will now pay in its share of capital to the permanent post-2013 eurozone bailout fund over five years rather than four and an EU commitment to “stress test” nuclear power stations. These are both pretty obvious bones thrown to the domestic German audience – the SPD and Greens are breathing down the neck of Merkel’s CDU party in important regional elections – but will do little to reassure people that the eurozone is serious about tackling its problems. Not for the first time, domestic politics is pitted against eurozone imperatives.

True, the proposals on economic governance and tighter fiscal discipline were broadly endorsed, but earlier German proposals have been watered down and there’s still much to play for in regards to how much of the package will be credibly enforceable. How will Italy and Greece cope with demands to get their debt-to-GDP below the 60% threshold?

Partly also due to Finnish resistance, eurozone leaders were unable to reach agreement on how to top up the existing temporary bailout fund, which, with Portugal more or less in a state of political and economic crisis seems a little complacent to say the least. We’re told that all will be settled at the next summit in June – but haven’t we heard this before; “It will all be sorted next time, no need to worry”.

Maybe Merkel and the rest of the eurozone’s leaders just prefer working under pressure. June really will be cutting it fine: Portuguese elections are expected to have been held only a week or so before and the new attempt at credible stress tests for Europe’s banks are due to be published.

How much longer can the eurozone live an alternate reality?