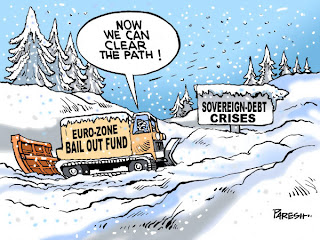 The Portuguese Prime Minister Jose Socrates resigned last night, after failing to get his new austerity measures through the Portuguese Parliament. This has pushed Portugal into a political crisis, and forced them to the brink of asking for a bailout.

As our new briefing on Portugal’s economic situation shows, a bailout could amount to €60bn – €70bn. Based on the structures of previous bailouts, the UK’s contribution could amount to as much as €4.26bn in liabilities (in the form of loan guarantees). That’s a big liability for taxpayers.

That’s why we argue for a combination of a restructuring and bailout. This would shift some of the burden onto investors; it would also help put Portugal on the road to debt sustainability rather than just recycling more debt around the EU.

For you restructuring-phobes out there, we are aware of the risk of contagion, but we believe there are many factors in this instance which make this a viable course of action:

– The bailouts of Greece and Ireland have solved little, they still have no market access to fund themselves and face ever increasing debt burdens.
– Markets are already boycotting peripheral eurozone debt, how much worse can things get (if it wasn’t for the ECB, Portugal would have gone bust long ago)!
– Portugal’s debt burden, although large in GDP terms, is relatively small in nominal terms (given the size of other EU countries and banks).
– Exposure to this debt is spread around the EU and does not fall heavily on peripheral economies; the European banking sector will withstand the losses it may incur (although if it coincides with other negative banks may start to wobble – but that’s an argument in favour of sorting out the banks!)
– The ‘Portugal goes, Spain goes’ assumption looks to be overstated (see positive market response to Spain despite Portuguese problems). In any case a limited bailout fund should help halt the spread of contagion from Portugal.
– Unfortunately, we’re in a crisis; difficult decisions need to be taken. A restructuring now is preferable to a more costly one later. The alternative is ongoing transfers of wealth to struggling eurozone economies – the sudden rise of the “True Finns” in Finland shows why this is politically very unlikely.

The question that now needs to be answered is when can or will any of this take place? That depends on what powers a caretaker Portuguese government has, but, in our view, the sooner the better. (The double standards displayed by the opposition in bringing down the government over austerity measures, then pledging to do a better job of managing the debt and deficit levels, doesn’t fill us with confidence though).

You can read our briefing here.