A third way to bail out struggling countries 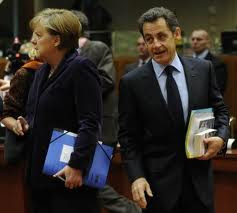 Much was discussed and a little agreed during Friday’s eurozone summit, but it was enough to give the euro a bit of a boost. Investors – going into the weekend with exceptionally low expectations – seemed pleased with the news that anything was agreed at all.

The most important and controversial measure agreed over the weekend looks to be allowing the EFSF – the eurozone’s main bail-out fund – to purchase government debt, under exceptional circumstances.

The conditions imposed on any country wishing to make use of the EFSF’s bond-buying scheme are pretty exceptional as well:

– EFSF can only buy bonds on the primary market (i.e. directly from governments)
– For this to take place, the government must enact an austerity programme as it would under a bailout

So what exactly is the difference between a bailout and using the EFSF to buy government bonds under these conditions? Not much, as far as we can tell.

One argument behind restricting purchases to the primary market is that it bails out governments rather than investors. Although that might be true, if the EFSF did purchase bonds in the secondary market the cost of borrowing for peripheral governments would undoubtedly fall by a lot more. There is also the added advantage of purchasing existing debt rather than issuing new debt and increasing the already heavy burden. In the end it looks like the standard EU compromise where both sides meet somewhere in the middle to achieve very little.

The decision also means that the ECB could well be forced to continue buying bonds on the secondary market, since a struggling country will think twice before signing up to strict conditions in return for the EFSF relieving them of some of their junk bonds.

What is significant, however, is that there are now three avenues through which the cost of failing economies can be transferred onto EU taxpayers – about a year ago, there were none (remember the days when some of us were foolish enough to believe that a guarantee in the EU Treaties, i.e. the no bail-out clause, actually meant something?):

Many of the key questions remain, however. Such as:

– What interest rate will the EFSF be charging on government bonds purchased?
– Will this option be open to countries who have already received a bailout?
– How will the activation of the EFSF’s bond purchasing programme be decided?
– Will Merkel be able to see this through amid domestic political resistance?

We’d hazard a guess that the EFSF would charge below market rates but above its lending rate, but we’d also expect some differentiation from the bailout loans otherwise it would look completely pointless.

Apart from that, we note that Greece – as we expected – has been granted what can only be described as a debt restructuring, though a limited one.

So on the upside, markets are slightly more re-assured. On the downside, expectations are now raised that a meaningful deal will be struck at the summit in two week’s time.

When you do scratch the surface, this looks perilously close to more of the same.