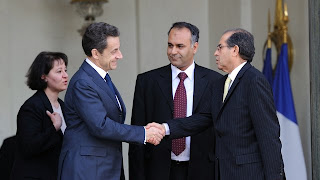 Attempts to create a common EU foreign policy rest on the notion that a single, clear voice emanating from Europe would carry more weight than a shrill, discordant cacophony of individual voices from member states. This is appealing in principle, but as we’ve argued again and again – it cannot be achoeved artificially.

During the unrest in Egypt, we noted that when Europe does indeed “speak with one voice”, it takes a painfully long time to co-ordinate, and usually results in a bland, anodyne statement. This is because the national interests of 27 member states have to be amalgamated, so as not to prejudice any of their divergent interests in wider international affairs.

Yesterday’s unilateral decision by France to recognise the Libyan rebels in Benghazi as the legitimate representatives of the Libyan people made for some lively discussions between the EU’s foreign ministers and some enlightening press briefings.

During “an unusually candid” press briefing, German foreign minister Guido Westerwelle said he had been sitting next to his French counterpart Alain Juppe when the news broke, and that Mr. Juppe later complained that he had not been pre-notified, and that Mr Sarkozy appears to have acted “on a whim”.

Italy distanced itself from the French position, with foreign minister Franco Frattini saying the UN and EU should send new fact-finding missions to Benghazi before making any decisions, while Belgian foreign minister Steven Vanackere said there is a “difference between engagement and recognition”. Sweden’s foreign minister chose a direct route of registering his bemusement at France’s circumvention of diplomatic norms by tweeting:

“Sweden recognizes states – not regimes. And most other EU countries are the same. Somewhat unclear on what France does.”

The confused state of affairs is further exacerbated by the fact the EU is trying to decide what line to take on a possible no-fly zone which might involve air strikes against Libyan military targets, which the European Parliament has urged them to do yesterday, with Labour MEP Richard Howitt warning that that EU states must “be prepared to change the current rules of engagement on whether military measures are required against colonel Muammar Gaddafi’s regime”. Today, David Cameron and Nicolas Sarkozy sent a letter to EU Council President Herman van Rompuy which took a decisive position on the Libyan position, arguing:

“the deliberate use of military force against civilians is utterly unacceptable… when the Libyan people win their fundamental rights, we should be ready to support them with the necessary assistance and cooperation”.

Meanwhile, Euobserver has reported Baroness Ashton’s people are not keen to visit Libya due to the volatile security situation in the region, prompting the question “what is exactly is it that they are paid so well to do?”

The confusion over Sarkozy’s decision to recognise the Libyan opposition unilaterally, and the lead taken on the Libyan crisis by France and the UK in general have yet again highlighted the difficulty, some would say futility, of assembling a common EU foreign policy.

Let’s hope that EU leaders can come up with something more coherent at today’s summit.