The EU should impose sanctions on Gaddafi 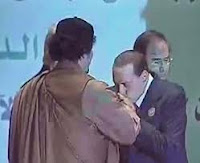 Over on the Spectator’s Coffee House blog, we set out the case for imposing sanctions on Gaddfi’s regime (while also looking at the difficulties EU member states are facing in coming up with a common policy on Libya, in what is a painfully familar story).

The EU spends €460 million a year in operational costs alone on its new foreign policy department, the External Action Service, headed up by Catherine Ashton. This body – created by the Lisbon Treaty – was Europe’s ‘great white hope’ for the global stage, finally allowing it to speak with one voice and therefore giving it leverage where it previously had none.

It hasn’t quite worked out that way. Caught between Cairo and Tripoli, the EU has received yet another reminder that its bureaucracies and institutions cannot magically replace 27 individual foreign policies, as EU leaders continue their bickering over what to do.

The EU’s response to the turbulence in Libya has been fragmented at best, and contradictory at worst. Italian PM Silvio Berlusconi – one of the few EU leaders with some clout in Libya – initially said that he didn’t wish to “disturb” Colonel Gaddafi since the situation was “evolving”. Czech Foreign Minister Karel Schwarzenberg maintained that the EU should not “get involved too much” because, “If Gaddafi falls, then there will be bigger catastrophes in the world”, though he later said he had meant something else.

In stark contrast, Finland, France – and in more careful language also Germany – have called for sanctions to be imposed on Gaddafi, including a travel ban and a freeze on his and his family’s assets, something categorically rejected by Italy and a few other countries. Still others have spoken in terms of general condemnation but proposed no concrete action, a group including Britain so far. Meanwhile, no one is paying much attention to the EU’s alleged foreign policy chief, Catherine Ashton. It all feels awfully familiar.

Does the absence of a common EU stance matter? I believe it does. While it’s true that the EU’s leverage in Libya and some other parts of Northern Africa and the Middle East is very limited, when Europe does pull together it can actually exert influence in its backyard. Enlargement remains the EU’s greatest foreign policy achievement made possible through a mix of aid and trade incentives.

So what should be done?

The UK should throw its full weight behind German, French and Finnish calls for sanctions, including an EU-wide travel ban on Gaddafi and his family, as well as a freezing of their assets across the bloc. Other possible responses, such as imposing a no-fly zone over Libya, should also be explored. The Colonel’s delirious speech yesterday – and his son’s comments that the family will fight “to the last bullet” – have confirmed that Gaddafi ranks amongst the Mugabes of this world (if anyone for a second thought otherwise).

Finnish Foreign Minister Alexander Stubb put it best when he said that “How can we on one side look at what’s going on in Libya, with almost 300 people shot dead, and not talk about sanctions or travel bans, and at the same time put travel bans and sanctions in Belarus?”. EU-wide sanctions could hurt Gaddafi – financially and politically – but waiting for too long will lessen their impact.

In terms of responding to the challenges in the wider region, David Cameron is absolutely correct in calling for radical reform of the EU’s neighbourhood policy, which together with other European programmes (such as the European Investment Bank), has dished out billions to the region, with few strings attached. In future, no reform on the human rights front should mean no cash.

At the same time, the EU needs to use other incentives and tools to promote long-term democratic and economic transformation in the region. For example, the EU should consider opening up its markets to more goods from North African countries on the path towards democracy. This should include agricultural products, which at the moment face a patchwork of tariffs in various guises before they can enter Europe. These barriers are contributing to rural poverty in North Africa and therefore instability. The UK is in a strong position to spearhead such trade reforms.

To give with aid on the one hand and take away through trade restrictions with the other makes no sense. Alas, it’s symptomatic of the inconsistency that too often characterises the EU’s relations with the outside world.

The Libyan protesters’ push for change presents an opportunity for Europe to put this right.