Mean journalists ganging up on Brussels 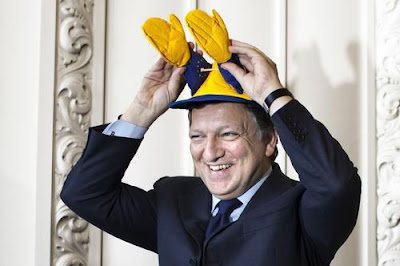 In what is seen as a direct response to revelations that 2,000 EU officials, earning between €124,000 and €185,000 a year, were also entitled to three months off work on full pay last year, Presidente Barroso said:

“The European civil service is often attacked for its apparent ‘privileges’ when this is not the case and I am always defending this.”

Adding that he “cannot accept populism against the European civil service”, while paying tribute to EU officials, describing them as a “great asset to Europe”.

Sure, EU officials can do a good job but please! Not a week goes by without media across Europe lamenting the various excessive ways in which EU officials are compensated for their work. In Barroso’s world, one is led to believe, this is just a case of mean journalists ganging up on Brussels (despite the Commission spending around €8 million a year on entertaining, training and ‘informing’ journalists. What has the world come to when you can’t even buy some decent coverage?)

Only today, Danish newspaper Politiken reported that on average, salaries across Europe have fallen by 5% since 2008, while for EU officials they have increased by 4% during the same time period. One in five EU officials has an annual salary of around €135,000, or more – which seems high even to us. Between 1,100 and 1,600 make more than the Danish PM.

It would be strange if media did not report on this.

Barroso should take a stroll down the hallway in the Berlaymont building and have a chat with his colleague, Budget Commissioner Janusz Lewandowski, who understands the need to cut at least some of the EU institutions’ expenditure.