The ECB’s herculean assumptions on Greece

An interesting presentation given in London last week by Italian ECB Board Member Lorenzo Bini-Smaghi, titled “Sovereign Risk and the Euro”, looked at two possible scenario’s for the eurozone: Plan A and Plan B (ECB board members aren’t known for their imagination)

First, Mr. Bini-Smaghi showed how plan B would create direct “wealth effects, a credit crunch, social/political repercussions”, etc. None of that is disputed.

Hardly surprising, he expressed his preference for plan A, claiming it “is painful, but most likely it is less costly than the alternative.” (emphasis added – it’s interesting to note how he qualifies that statement).

He described Plan A, which is the official EU / IMF strategy, as follows:

In the case of Greece, the primary surplus required to stabilise and reduce the debt after 2013 is ± 6%

That Greece would be running a massive 6 percent budget surplus after 2013 isn’t plausible, which Mr. Bini-Smaghi also himself sort of admitted:

if the primary surplus needed to achieve sustainability is considered too high because the market interest rate is high, there are two ways to restore sustainability:
– reduce the interest rate burden (and lengthen the maturity), while keeping it non-concessional
– haircut on debt

So if the necessary budget surpluses cannot be achieved then debt must be ‘reduced’, assuming this can be done successfully is assumption 2.

He went on to say that the proposal for a bond buy-back program – under which the eurozone’s permanent bail-out fund is used to buy back Greek bonds directly or indirectly – could be a way to cut debt:

Under discussion: buy back at market prices (lower than nominal), by the member state or through the EFSF, subject to strict conditionality

We commented in our recent briefing on a possible Greek default that this, in turn, rests on two sub-assumptions:

1 – Although a large number of bonds are being held by the ECB (around €60 billion nominal value) just buying these bonds back at a discount will only reduce Greece’s debt burden by at most 4.15%. Not to mention the fact that the ECB has stated that it plans to hold all bonds to maturity.

2 – Therefore bonds would have to be purchased on the secondary bond market or in reverse auctions. It also seems that many banks are holding bonds to maturity to avoid declaring losses on already fragile balance sheets. But even if they were willing to sell it might not help. As we have already said: “the sudden increase in demand for Greek bonds, as a result of Greece itself having a €50 billion pot of money with which to purchase its own bonds, could actually lead to an increase in prices”.

However, Bini-Smaghi himself admitted that having assumption 2 (reduced debt) might not be enough if assumption 1 (budget surpluses) isn’t also realized, saying:

If the debt were cut by one-third, the primary surplus would still be relevant.

In other words, the ECB is relying on two pretty heroic assumptions. Greece needs find around €148.6 billion to refinance its debt by the end of 2014(not including the cash needed for interest payments), according to the Greek Ministry of Finance. Dreaming the debt away won’t work.

Bini-Smaghi went on to say that in any case, “growth is key”, noting that in order to restore competitiveness, this will need to happen “mainly through domestic adjustment”.

He makes a list of all kinds of laudable measures that are needed for the Greek economy to grow again, ranging from” deregulation of transport and energy sectors” and “opening up of closed professions” to “increase in retirement age to 65”.

Assuming that this is economically and politically feasible in Greece is assumption 3; in this case he adds no caveats. Given the well documented political unrest in Greece and the significant strength of vested interests this seems like a very large assumption as well. The country has no doubt come some way – but it still has a massive distance left to travel if it wants its economy to become sustainable.

And as an indication of the difficulties ahead, over recent days, we’ve heard of pretty stiff opposition from the Greeks to the proposed EU-IMF privatization plan (which could free up around €50 billion in an ideal world). A spokesman for the Greek government captured the mood: “We asked them for help…not to meddle in our internal affairs” (more on this here).

Even if the first three assumptions were proved right, and all their goals achieved there is still one more implicit assumption to this whole discussion. It is that once this is all done, the eurozone (specifically the one-size fits all monetary policy which could facilitate boom-and-bust cycles or wipe out achieved competitiveness gains) will not lead Greece down this road again.

Assuming that all of these measures will solve Greece’s long term problems within the confines of a monetary union is assumption 4.

Interestingly, Bini-Smaghi gave another speech recently commenting on precisely this issue, labelling moves towards a political union of eurozone countries “risky”. Instead, he said, stronger financial supervision should be pursued in order to stop boom and busts cycles. 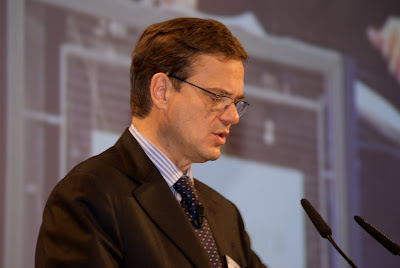 However, Bini-Smaghi demonstrates the enormity of his fourth assumption with the fact that he sees this new financial order as

a system of rules and procedures which binds the financial system, in the same way as the Stability and Growth Pact binds national fiscal policies.

The SGP has proven, shall we say, difficult to implement in practice, begging the question why a system for financial supervision based on the same model should be any more succesful.

The point here is that the ECB is throwing around a huge number of assumptions. A business plan being this speculative would never make it past the board in any company (well, perhaps a few). But in the eurozone this is apparently called Plan A.