Assumptions in the British media are funny sometimes (though other countries’ suffer from this too) – not least amongst those who claim to take the intellectual high-ground on the European Union.

Consider this quote from the Guardian, for example, in a piece about the EU summit last week:

The Chancellor Angela Merkel is to ditch years of opposition to common economic policymaking among Europe’s single currency countries today, in a major shift that will widen the gulf between Britain and the EU mainstream (emphasis added)

Or this one, from David Rennie, the brainy Political Editor of the Economist:

If 2011 does see a leap towards a two-speed Europe, securing a place in the slow lane will only mark the start of Britain’s worries (emphasis added)

Or Philip Stephens in today’s FT,

The German chancellor and French president want to couple only 17 of the Union’s 27 carriages to their refurbished train. David Cameron’s British government is perfectly content to wave goodbye from the platform. (emphasis added)

Note the expressions “mainstream”, “slow lane” and waving “goodbye from the platform” – without any definition or further explanation – to present an underlying assumption as if it was a matter of fact. The assumption is that, looking ahead, not being in the eurozone is synonomous with being left on the periphery, in the ‘slow lane’ or even standing still – an assumption which arbitrarily puts further integration in and of itself above, for example, economic growth as the main determinant of what constitutes the EU’s “fast lane”.

This borders on thought-terminating cliché – trying to end a debate with a commonly used phrase which is actually meaningless without some sort of definition, but that tends to discourage further reflection from the reader or listener. Or perhaps we can call this appeal to process. Circular reasoning which sees the process of EU integration, in and of itself, as determining the speed at which a country travels – by virtue of being, well, EU integration. The actual outcome is secondary. (To avoid bashing British media too much, here’s an example of a non-British paper, which consistently commits this fallacy without realising it)

To illustrate: Under the definitions in the articles that are cited above, countries such as Poland, Denmark and Sweden are confined to a life in the EU’s “slow lane”, while Greece, Spain and Italy, for example, can freely enjoy the “fast lane”.

So nothing on growth, employment rates, demographics – factors that seem pretty important to consider in any discussion about “fast” and “slow” in Europe…?

Let’s consider the division into a fast lane and slow lane, as defined by the cited articles (particularly the second one) in light of economic growth – just to illustrate how intellectually lazy the two-lane assumption is: 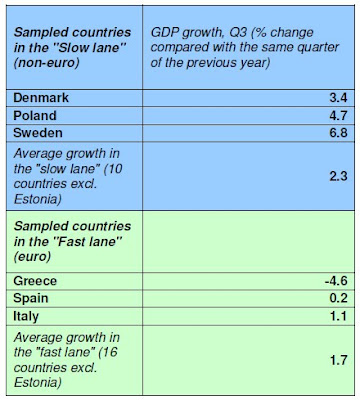 Not quite the same picture, is it?

Now, the articles are of course correct in that there are challenges for the UK, and other non-euro states, arising from the eurozone crisis and the drive for more economic integration in its wake – including the risk that the centre of gravity in EU-17 now moves in the protectionist direction. This is a valid discussion.

But these challenges (and opportunities) are far more interesting than what can captured by a simplified – and arbitrary – reduction of the issue into ‘fast’ and ‘slow’ lanes.

And to continue the illustration, look at how Sweden – a non-euro member who, for instance, has also vetoed moves towards common EU family law (=the slow lane presumably) – has strenghtened its position in Europe over recent years. Why? Hint: the economy.

Without rehersing the pros and cons of the Single Currency, the question is also how being part of what increasingly looks like a debt union automatically puts you in the fast lane.

Throwing around assumptions and reducing multi-facetted discussions into oversimplified cliches is lazy journalism.