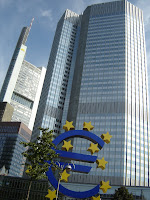 Axel Weber’s elevation to President of the European Central Bank was long seen as a mere formality – a natural step towards the realisation of a”German-speaking euro”. So reports in today took plenty of people by surprise, including Chancellor Merkel and the markets. Apparently, the Governor of the German Bundesbank has decided to pull out of the race because, in the words of a European official quoted by the WSJ, he has “other plans”. Some papers suggest that these plans could involve a top job at Deutsche Bank.

The situation is somewhat confused. According to Bundesbank sources, Weber might still want to run for ECB-President. Weber himself has said he will not make any comments until he discusses the issue with Merkel. But our guess is that Weber has thrown in the towel.

First, Weber doesn’t have lots of friends in the eurozone’s “periphery” countries. He’s a fierce (and vocal) opponent of the ECB’s purchases of junk bonds from Greece, Ireland & Co. And he’s probably keen on raising interest rates to curb inflation, because, at the end of the day, this is what the ECB is there for. But such a policy would be poison for vulnerable economies in the eurozone, that are trying bounce back from the economic downturn.

Germany may also have decided that sacrificing Weber’s ECB Presidency was a price worth paying in return for France’s backing for the “pact for competitiveness”.

So now what? Merkel is said to be lacking a “plan B”. The only viable alternative would be Klaus Regling, the chairman of the European Financial Stability Facility, but he has no intention of quitting his current post.

Sarkozy would presumably be quite keen to replace Trichet with Christian Noyer, the Governor of the French Central Bank. Or maybe with IMF Director Dominique Strauss-Kahn (simultaneously neutralising a possible rival in next year’s French Presidential elections). But nationality matters, and it’s very unlikely that another Frenchman is appointed in place of Trichet.

Italy’s Mario Draghi has therefore emerged as the strongest contender. He has been doing a decent job in protecting Italian banks from the crisis, and his international reputation as Chairman of the Financial Stability Board is up to scratch. He’s also considered more diplomatic than the hawkish Weber.

However, his previous position at Goldman Sachs could prove to be an obstacle. In addition, as ECB President Draghi would also chair the European Systemic Risk Board, the new EU watchdog in charge of macro-prudential supervision. But Italy has already secured the chairmanship of the European Banking Authority (Andrea Enria). There are four new financial supervisors in the EU, and giving two of the chairman positions to Italy might prove too much, especially as the UK, Germany and France got none.

The situation remains fluid, in other words. Trichet is leaving the Eurotower in October and what’s clear is that the eurozone can hardly afford a row over his successor.