Today saw a drop in the borrowing costs for Ireland, Spain, Portugal and even Greece, as markets apparently took heart in rumours that EU leaders will soon strengthen the main bail-out fund, the EFSF, to back up eurozone countries in trouble

News of more stability in the markets are welcome, the reason underpinning them (EU leaders consider putting even more taxpayers’ cash on the line to save countries that mismanaged their finances) are not – a contradictory feeling that those of us who saw this coming will have to deal with.

But notwithstanding positive developments of late, there has been something very familair about the last couple of weeks – as Greece is again coming back into the spotlight. We hear increasing worries about Greek debt levels and leaked rumours over a possible restructuring combined with a bailout.

It may not be as much hype, but looking at the numbers, in fact, it’s feeling alot like last Spring.

Leaked reports claim that EU leaders are now considering a restructuring plan for Greece’s debt, which would see the country buying back some of its own debt at a cheap price, using some €50 billion from the EU’s bail-out fund, in combination with a lengthening of the pay-back period of the EU loans Greece has already recieved.

As we argue in our latest briefing, Greece will find it almost impossible to make it through the next two years without some sort of additional help or restructuring. Just consider the facts and figures:

EU leaders are therefore right to consider ways to restructure Greek debt. However, as we also argue in the briefing, the proposal contemplated isn’t in itself much of an answer. As the table below shows, even if Greece were to make it through this year, or even 2012, it would continue to face daunting re-financing targets, which, again, aren’t matched by available bail-out cash. 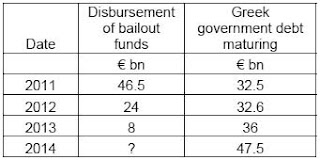 So even if the rumoured restructuring plan were implemented we estimate that Greece’s debt to GDP ratio would still top 145% in 2011, though if private bondholders agreed to take part in the plan (which is far from certain), this could be slashed considerably more. For Greece to get back on the path towards sustainability its debt to GDP ratio needs to be below 100%. This, in turn, would require a write off of more than one-third of all Greek debt. A substantial jump from the 2.4%-4.2% expected with the current plan (without private bondholders included).

There is also no indication as to how Greece would deal with the €148 billion of debt maturing by 2014, nor the interest payments on its debt, which accounted for a whopping 20% of all government expenditure last year.

The scheme proposed by the eurozone leaders also fails to address some other familair problems. Greece has a massively overvalued currency, poor growth prospects and little international competitiveness. Until these issues are properly dealt with, Greece’s long term prospects look bleak.

The markets may be looking up right now – which is good news – but for Greece, alas, little has actually changed, despite some considerable austerity efforts. Even with a mild restructuring/another bailout, the Greek debt crisis is likely to rear its head again.

Maybe a third lightening strike will force eurozone leaders to try something different.