From the horse’s mouth: EU Constitution and the Lisbon Treaty are the same 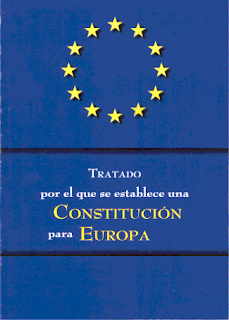 The past month’s debates in the Commons over the EU Bill have once again revived the thorny issue of the Lisbon Treaty and its abandoned twin the EU Constitution. Many members of Parliament still talk bitterly of the referendum that never came. Let’s re-cap: the previous Labour government denied the British people a say on the Lisbon Treaty despite promising one in its election manifesto, it’s sole argument being that the Treaty differed from the EU Constitution (despite almost all other EU leaders arguing that it was the same and the similarities becoming patently obvious when reading both side by side).

Of course, some MPs still defend the Lisbon Treaty with fervour, like Former Europe Minister and Labour MP Chris Bryant for example – for good reason often described as ‘permanently outraged’. Last week in the Commons he went on his usual rant against anyone and anything that happens to favour EU and democracy reforms. This time, however, he completely slipped up and admitted what we all already know:

Referendums in different countries operate in different ways. I think that I have heard the Minister say on a couple of occasions both here and elsewhere that there was never a referendum that supported the Lisbon treaty. That is completely untrue, as the Spaniards were the first to hold a referendum and it had an 83% or 84% yes vote, so he is wrong about that.

As we know, in Spain there was only a referendum on the EU Constitution in 2005, and never on the Lisbon Treaty. Bryant is in effect admitting that the two are the same thing – a bit of a political faux pas for someone who was Europe Minister in the very same government that denied the electorate a referendum (though, to be fair to Bryant, he joined the government when the action on Lisbon was largely over – Labour saw through a record 12 Europe Ministers in 13 years).

Bryant’s candid admission is certainly not shared with his colleagues. Amazingly, the Labour front bench still insists that the two are different. Just one day earlier in the Commons, Shadow Europe Minister Wayne David argued:

It is pretty obvious to anybody who has given the matter any detailed study that there is a fundamental difference between a proposed constitution on the European Union and the treaty of Lisbon.

Please Mr. David and colleagues, give up on this one. You broke a manifesto promise, deal with it.

This debate is over.