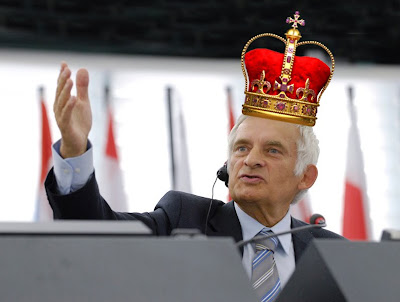 Spot the odd one out…

The European Parliament’s 216-mile monthly trek to Strasbourg beggars belief. But no matter how many citizens, MEPs or even EU officials complain, the out-of-touch people at the very top refuse to bow their heads to listen.

In an interview with Euractiv, European Parliament President Jerzy Buzek got the chance to explain why he defends the Strasbourg seat.

Strasbourg is a symbolic place. Symbols are important

€200 million a year is an expensive symbol, but Buzek sticks to his guns:

We can also ask whether for some member states it is right to keep a monarchy. But for these countries that has an historical meaning and it is still an important part of public life and interest

Right…Perhaps that explains the European Parliament’s, at times, interesting take on democracy (i.e. voting to ignore the outcome of the Irish referendum on the Lisbon Treaty). He continues,

So, why would we eliminate Strasbourg? It is the very symbolic place of the European Union. It is indeed very important as it represents the essence of our main value: solidarity

Apart from the bizarre parallel that Buzek is trying to draw between Europe’s monarchies and the two-seat European Parliament, what kind of ‘solidarity’ is he talking about? And with who exactly? Scrapping Strasbourg would save over €200 million a year and 20,268 tonnes of CO2 emissions, so he certainly can’t be referring to solidarity with taxpayers or the environment (but who cares, eh?)

What’s next, horse drawn carriages for Buzek and his mates and a regal eurocrat wedding?