Start with the man in the mirror 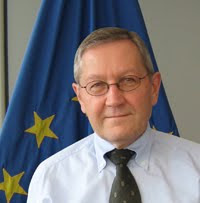 In an opinion piece in the FT published the other day, Klaus Regling (see photo), the chief executive of the eurozone’s temporary bailout fund attempts to counter critics of the common currency.

The unelected official, who looks after €440 billion in loan guarantees, argues that “EMU’s critics will eat their words again”, explaining how the euro will be saved through more budget discipline and sounder economic policies in member states.

He gives the example of Latvia, writing:

Latvia which has a currency pegged to the euro, testifies to the success of this policy. Contrary to commentators who predicted disaster for Latvia early last year unless it gave up its hard peg – in line with advice from the commission – it did not devalue its exchange rate. A real effective devaluation was achieved through severe cuts in nominal income. Today its economy is growing again. Those outside “experts”, who always seem to know what is good for Europe, should take note.

He is right that “internal devaluation” can indeed restore competitiveness, although it’s questionable whether politicians in countries such as Greece are willing to follow in Latvia’s footsteps on this one. Of course Regling omits to mention that, in the case of Latvia, the country’s reduced competitiveness was driven by a bust in the real estate market, in turn partly brought about by Latvia’s euro peg.

An article on Global Property Guide makes clear that the damage was inflicted by the EU’s pressure for a euro-peg on the Baltic country, which isn’t eager to go against EU guidance, given that its EU membership is also a matter of geostrategic security.

From 2004 to 2007, property prices doubled, tripled or even quadrupled, just to fall in December 2008 by a crazy 41% in real terms from a year earlier. The euro peg had first pushed mortgage rates disproportionately low, boosting excessive demand for real estate. The following adjustment through increased rates bankrupted many Latvian citizens who saw the value of their investments drop.

In his defence of the monetary union, Dr Regling doesn’t mention any cure to the eurozone’s most fundamental problem – its one-size-fits-all interest rate policy – which has a tendency to facilitate booms and busts (though not the only factor ). Even the Celtic Tiger, Europe’s champion of competitiveness, was floored by these mechanics, as low interest rates created a real estate boom and bust, poisoning systemic banks and bringing the country to the edge of the abyss (despite the fact they passed the EU’s stress tests only last summer).

As the German economy continues to boom, there will soon be calls in Germany for the ECB to jack up interest rates in order to prevent inflation. But this, in turn, will seriously undermine Spanish and Irish efforts to get their economies back on track – and potentially off set many of the hard-fought reforms that the two countries are pushing through at the moment.

No matter how much of taxpayers’ money EU leaders will put on the table, as long as there really isn’t a European economy, Dr Regling should continue to expect criticism of EMU’s flawed construct.

And in terms of lashing out at the “outside experts” who know what’s “good for Europe”, we suggest Mr. Regling starts with the man in the mirror. As Ambrose noted in yesterday’s Telegraph,

Perhaps it is unkind to point out that Dr Regling was the European Commission’s director-general of economic affairs from 2001 to 2008, more or less spanning the incubation period of the catastrophe now at hand. To borrow the immortal line from Watergate: what did you know and when did you know it?