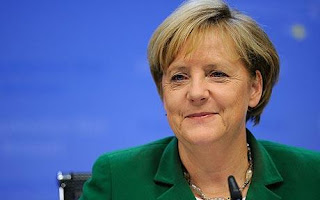 Before yesterday’s European Council meeting, the European press were predicting that the Franco-German agreement made in Deauville might as well have been made in “never-never land”. Member states will resist and President Sarkozy and Chancellor Merkel will stand “isolated”, they said.

And even as late as this week, UK-based EU observers were in the news repeating that a new EU treaty is virtually impossible, only a year after the Lisbon Tretay entered into force.

Open Europe has argued for months that Merkel means business in her drive for Treaty change – and that she could achieve it if she puts down her foot (the exposure of German taxpayers to sub-prime eurozone loans is one clue, the need to address potential challenges in the German Federal Court is another).

And sure enough, today the German press is buzzing. FT Deutschland’s headline reads, “Merkel wins at Euro-Poker”. Die Welt writes, “Merkel asserts her will in Brussels”. Spiegel chimes in with, “Europe comes up against the Iron Chancellor”.

In a commentary in Handelsblatt Thomas Ludwig writes that, “Merkel and the German government held their nerve at summit negotiations and ultimately had the better argument on their side”. He also congratulates the German Chancellor for “being hardheaded” and said it will “pay off for the eurozone in the long-term”.

Handelsblatt also reports that Merkel advocated the suspension of voting rights for members who flout budget rules purely “for tactical reasons”. In reality, her primary aim was to push for a permanent crisis mechanism for the eurozone, which most member states have agreed is the best way forward. In other words, she established an outlier for member states to reject, pavign way for a deal on what she really wanted.

Merkel just gave her EU colleagues a lesson in how to get things done in Europe – is Whitehall taking note?