European Parliament starting to get embarrased about asking for more money? 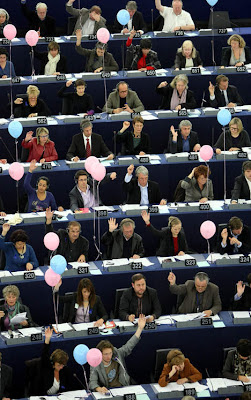 We’ve said a thing or two in the past about the wonders of EU spin ‘communication’. But the European Parliament’s attempted defence of MEPs’ decision to increase the EU’s 2011 budget by 5.9% is a stretch so far that it has descended into farce.

Firstly, let’s take the EP’s press release titled, “MEPs vote for moderate budget for 2011”. “Moderate” is hardly the word to describe a 5.9% increase when national governments all across Europe are tightening their belts and, in the UK, George Osborne is announcing the most significant spending cuts for generations.

The press release goes on to say “MEPs understand the pressures on Member States’ budgets and have therefore broken with their tradition of suggesting a notably larger budget than the Commission has proposed.”

How gracious of them.

Strange too that the press release didn’t mention the percentage increase to payments (5.9%), instead opting for the increase to commitments of 0.8%. An earlier April press release has no such qualms about mentioning the higher figure.

To add insult to injury, EP President Jerzy Buzek has stated that “The European Parliament has acted with a great sense of responsibility.”

MEPs are certainly doing themselves no favours whatsoever.