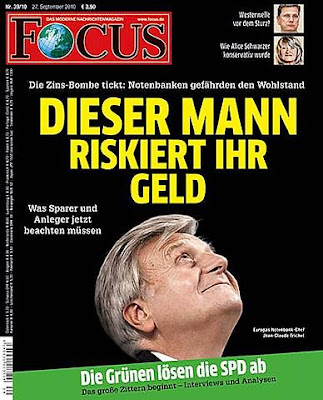 The frontpage of German magazine Focus this week features a picture of ECB President Jean-Claude Trichet – accompanied by the dramatic headline: “This man is risking your money”. Equally alarmist, the front page notes that “the interest rate time-bomb is ticking: central banks endanger prosperity”.

The magazine asks whether the ECB will become a “bad bank” itself, arguing that its ongoing low interest rates, junk bond purchases and aid to private banks harm savers and investors.

It quotes experts predicting that life insurers will only be able to offer their customers returns of 1.75% next year – far below their 4% target, echoing similar concerns to the Netherlands.

Focus notes that central banks outside the eurozone have also engaged in controversially low interest rate policies (by the way, prompting the Telegraph’s Ambrose Evans-Pritchard to call for the US Federal Reserve to be shut down) .

Difference is that there might be democratic support for this kind of policies in America (and the UK) since the logic behind the policy, whether correct or not, is tailored around the specific needs of the US economy and American savers and taxpayers. In Euroland, this is clearly not the case as shared currency complicates national interests and creates a mismatch between economic and monetary policy.

But viewed from Germany, the cobweb of euro trade-offs is becoming increasingly clear: for example, massive exposure to foreign governments’ debts and haircuts on pensions/savings vs. the benefits of keeping Greece and others in.